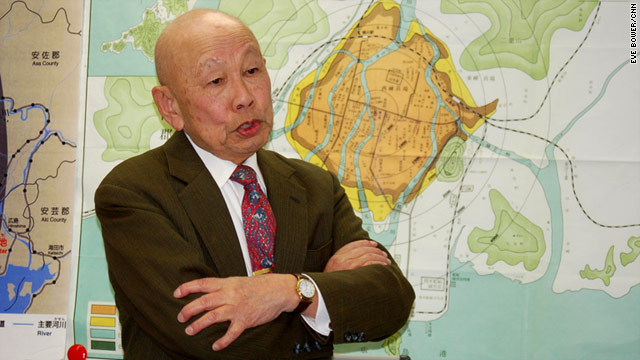 Hiroshima survivor Keijiro Matsushima: 'It's like the third atomic bomb attack on Japan, but this time we made it ourselves'.
RELATED TOPICS

Osaka (CNN) -- In Hiroshima, recent images of razed villages and burning shells of buildings in Japan's quake-damaged northeast are recalling painful memories of a time sixty-five years ago when an atomic bomb created similar effects in their town.

But it is the less visual aspect of this disaster the threat of nuclear fallout that has activists in Hiroshima sounding the call for a change in Japan's approach to its supply of electricity.

"It's like the third atomic bomb attack on Japan," said Keijiro Matsushima, an 82-year-old survivor of the atomic bombing at Hiroshima. "But this time, we made it ourselves."

Japan has 54 nuclear power plants nationwide, and about one-third of its electricity comes from nuclear energy. When many of these plants were built, they were designed to be in operation for thirty years, but as Japanese power companies face increasing public resistance to the construction of new plants, these plants will be operating for forty to fifty years, says Akira Tashiro.

Navigating a radiation cloud in Japan

Tashiro, a Hiroshima newspaper journalist, has specialized in stories related to nuclear energy and the effects of radiation for over 30 years. His employer, The Chugoku Shimbun, actively advocates for the elimination of nuclear weapons and has a tradition of reports that focus on issues related to nuclear power.

"This might be a good turning point," Tashiro said about the concern over damaged nuclear plants in northeastern Japan. Tashiro is calling for the Japanese government to increase their investment in research of renewable energy resources.

"I hope Hiroshima will take a lead on this because of our own experience with the atomic bomb," he said.

Matsushima, the bomb survivor, is worried about the people exposed to the radiation in recent days, but doesn't see long-term viable alternatives to nuclear energy. "Unfortunately, this is a small country. Japan doesn't have much energy. It may be a necessary evil."

Shoji Kihara, of the Citizens' Nuclear Information Center, believes the Japanese government is not being fully forthcoming with information about the risks facing people close to the affected nuclear plants.

Kihara has written a letter to the Chugoku Power Company and asked them to suspend their plans to build a new nuclear power plant at Kaminoseki, about 80 kilometers (50 miles) from Hiroshima. He has written many letters to the power company over the years about this project, but he says he is optimistic that this will be his last.

Matsushima also believes this crisis will prove a turning point for the country as a whole. "Perhaps Japan can't get along without nuclear power stations in the future. But Japanese power companies will have a harder time building new nuclear power plants from now on."