Tsunami aid and relief: How you can help 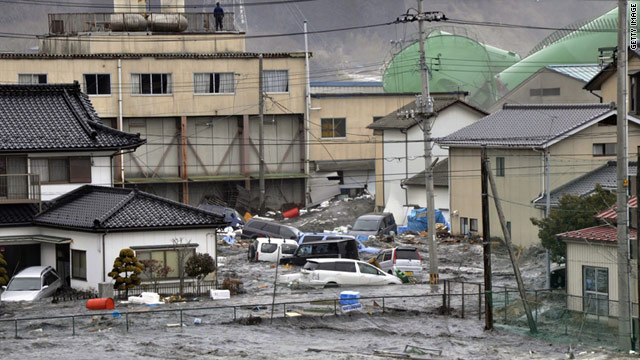 (CNN) -- The world continues to mobilize to help victims after a massive earthquake and tsunami sparked a nuclear crisis in Japan.

Google is helping victims touch base with friends and loved ones. Its People Finder, which has tracked more than 606,800 records, allows users to look for victims or post information about people. It works in five languages.

As nations offer monetary aid, condolences and rescue teams, many people around the world are seeking ways to ease the burden on the Japanese government and people.

The humanitarian group World Vision has personnel on the ground distributing first-relief supplies such as water, diapers, blankets and powdered milk to victims and their children.

It also plans to establish one or more "child-friendly spaces" for kids "affected by disasters to resume normal childhood activities and experience structure and security that are often lost following emergency situations."

Google's resource for missing in Japan

Follow World Vision's blog for updates, and visit its website or text "4JAPAN" to 20222 to send a $10 donation to the group. It will show up on your next mobile phone bill.

To aid the Red Cross efforts, you can text "REDCROSS" to 90999 and make a $10 donation to the organization. You can also keep up with Red Cross updates by following its Twitter feed and Facebook updates.

The Salvation Army in Japan has three emergency service relief teams in affected areas. The organization is issuing updates via its blog, its Twitter feed and Facebook page. It also is accepting donations via text message. Those interested in contributing $10 to the group can text "JAPAN" or "QUAKE" to 80888.

Relief workers from AmeriCares, which is also accepting donations, are in Japan working to deliver medicine and supplies to hospitals, shelters and health responders.

Save the Children sent emergency response teams to assist its staff in Japan. Donations to the group's Children's Emergency Fund will help preserve the welfare of young ones, who "are always the most vulnerable in a disaster," Eiichi Sadamatsu in central Tokyo said in a statement.

The organization has set up multiple child-friendly spaces and plans to set up more in the coming days. Text "JAPAN" to 20222 to donate $10 to Save the Children for Japan relief.

The U.S. Fund for UNICEF is also raising funds for child victims. A UNICEF team assessed the worst-hit areas of Japan to see where funds are most needed.

UNICEF said that if donations exceed anticipated needs, it will redirect excess funds to other areas where children have the greatest need. To help, call 1-800-FOR-KIDS, visit the group's website or text "JAPAN" to 864233 to donate $10.

Other organizations taking advantage of texting donation options include Mercy Corps (text "MERCY" to 25383 to donate) and Convoy of Hope (text "TSUNAMI" to 50555 to make a $10 donation).

Globalgiving.org, another aid organization that allows donors to select the causes they want to support -- including climate change, economic development, human rights and disaster relief -- has established a Japan Earthquake and Tsunami Relief Fund.

Globalgiving will disburse funds to organizations providing aid and relief to victims. Text "JAPAN" to 50555 to donate $10 to the fund.

Among those organizations are Save the Children and the International Medical Corps. The corps sent a team of doctors to Sendai, where they will be delivering supplies, assessing needs and identifying communities that have not been reached.

To contribute to the corps' efforts, visit its website or text "MED" to 80888 to send the group a $10 donation.

ShelterBox has a response team working to deliver emergency shelters and lifesaving supplies to families in hard-hit areas. Government officials in Iwate Prefecture have requested 500 ShelterBoxes to families who lost their homes.

"In light of how many people are now displaced from their homes, our primary concern is making sure that our aid is available to those who need it most," Tom Henderson, ShelterBox founder and CEO, said in a statement.

Doctors Without Borders has a team of people on the ground to assist in the massive government-led relief effort. The organization has been providing medical consultations in evacuation centers in hard-hit areas.

ShelterBox and Doctors Without Borders are accepting nonspecific donations.

The American Jewish Joint Distribution Committee is working with the Japanese Jewish community to get emergency relief -- food, water and supplies -- to victims in the hardest-hit Miyagi and Fukushima prefectures.

Like many organizations, the JDC is accepting only monetary donations at this point. Visit the JDC's website to donate to its Japan/Pacific Emergency Relief Fund.

A disaster relief team from Operation Blessing International handed out water and emergency food rations in Sendai and is offering emergency relief supplies, kerosene and torpedo heaters in other hard-hit areas.

To contribute to OBI's efforts, visit its website or text "BLESS" to 50555 to send the group a $10 donation.

Direct Relief International has provided money for emergency materials for thousands of displaced persons in 20 facilities throughout Miyagi prefecture.

Donations to the group's Japan Relief and Recovery Fund can be made on their website or by texting "GIVE10" to 20222 to donate $10.

And don't forget the "other" victims of the quake and tsunami. The American Humane Association, which has been rescuing animals in disasters since 1916, has set up a relief fund for rescuing animals. Donations help provide shelter and care.

The Search Dog Foundation has six canine disaster search teams in Japan to help find people trapped in the rubble. The organization is accepting nonspecific donations to help search teams across the country.

For more information, please read CNNMoney's story explaining how donors should watch the crisis unfold before sending contributions. The article also provides tips on what to give, where to give and how to avoid scams.