Rescues in Japan: 'Thought today was the last day of my life' 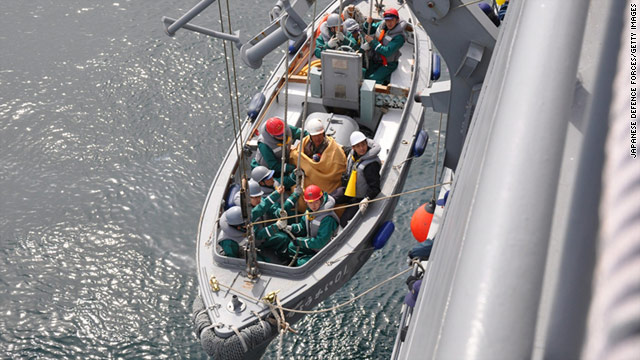 Minami Sanriku, Japan (CNN) -- A 60-year-old Japanese man was rescued Sunday more than nine miles out at sea after clinging to the swept-away remnants of his home for more than two days.

"I thought today was the last day of my life," Hiromitsu Shinkawa told his rescuers, according to Kyodo News Agency.

Amazing stories of survival began to emerge in Japan, even amid the horrific destruction of the massive quake and subsequent tsunami that has killed nearly 1,600, destroyed tens of thousands of homes and stoked fears of a potential nuclear power plant meltdown.

Three elderly people were found alive in a smashed car that had been tossed by the tsunami. Another woman clung to branches in a tree and took her chances by grabbing onto a floor mat that drifted nearby. The rushing currents pushed her around and around, past many buildings, she said. Her daughter was washed away and remains missing.

Survivors found in car in debris

"I had been waiting for help all night," the rescued mother said.

Prime Minister Naoto Kan said about 15,000 people have been rescued so far. Japanese troops were canvassing the destruction by the thousands in search of any sign of life.

Hiromitsu Shinkawa, the man rescued at sea, told rescuers he and his wife had returned home shortly after the 8.9-magnitude quake to pick up some belongings when the tsunami slammed the city of Minamisoma.

"I was saved by holding onto the roof, but my wife was swept away," he said, according to Kyodo.

Video showed him barely visible amid heaps of splintered wood, shattered homes and other debris floating more than nine miles (15 kilometers) at sea. He could be seen waving a self-made red flag.

Rescuers aboard a Maritime Self-Defense Force destroyer spotted him and quickly dispatched a smaller rescue boat to pick him up.

When a member of the force handed Hiromitsu something to drink on the rescue boat, he drank it and burst into tears, Kyodo reported.

"No helicopters or boats that came nearby noticed me," he said.

In Minami Sanriku, a town in northeastern Japan, a family photo album lay on the sodden ground, showing a beaming man holding a newborn baby -- happiness out of place amid the devastation.

It's been estimated that some 9,500 people -- half the town's population -- may be unaccounted for. Only a handful of buildings were left standing, with the rest a mangled mess of rubble. A boat sat on the edge of town, carried more than two miles inland by the tsunami.

When the tsunami warning sounded Friday, "most people ran away," said Choushin Takahaski, who was working in a local government office near the water.

"Some had to leave the elderly or disabled behind on the second floor. I think a lot of those left behind probably died."

As the wave hit, he said, it felt like a dream.

I saw the bottom of the sea.
--Resident of Minami Sanriku

"I saw the bottom of the sea when the tidal wave withdrew and houses and people were being washed out," another resident said. "I couldn't watch anymore."

When the alarm sounded, police abandoned their cars, rescue workers blew whistles and people rushed to high ground. "It's your life!" shouted one man. "Run!" It was a false alarm, but such warnings are taken seriously in the wake of the disaster.

In Sendai, south of Minami Sanriku, Hiroki Otomo said his mother and uncle remain missing. They were at the family's home when the tsunami struck.

"Frightening beyond belief," Otomo said. "I have no words."

Many areas of the town are simply gone -- mud and boards littering an area where a row of homes used to stand. A vehicle was found upside-down among tree branches. A school, which had 450 people inside when the tsunami hit, stood with its doors blown open and a jumble of furniture -- plus a truck -- in its hallways. Some teachers and students were able to escape the building, but officials said others did not.

Sendai residents said the water reached the treetops as it swept into the town. Cars were tossed like toys, windows blasted out and homes crushed or swept away completely.

"As I was trying to evacuate, the tsunami was already in front of me," another young man said. "I tried to drive, but I ended up running instead."