At least 160 people tested for radiation 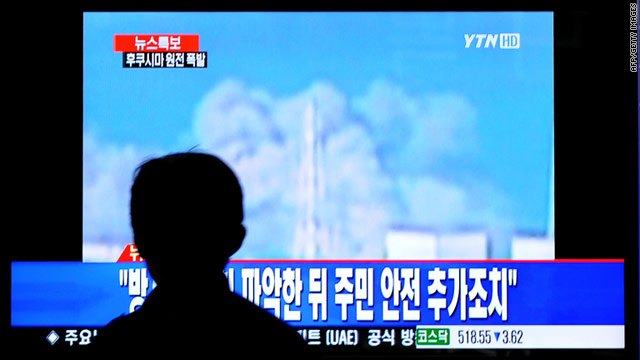 Residents have been told to close doors and windows, switch off fans and place wet towels over the nose and mouth.
STORY HIGHLIGHTS
RELATED TOPICS

(CNN) -- At least 160 people were being tested for radiation exposure on Sunday after tens of thousands of residents were evacuated in the wake of an explosion at a nuclear reactor damaged by Friday's massive quake and tsunami.

According to Japan's Nuclear and Industrial Safety Agency (NISA), one group of about 60 people were thought to have been exposed while waiting to be picked up by helicopter at the Futaba high school grounds.

A further 100 people evacuated by bus from Futaba-machi were also being tested, the agency said. Authorities warned residents to keep windows and doors closed.

Of the 100 people evacuated by bus, nine had been tested and one had been shown initially with a radiation count of 100,000cpm -- a level at which experts say a person needs to be decontaminated. Results were still to be released from the helicopter evacuees.

The other eight people showed counts ranging between 18,000cpm and 40,000cpm. It was not known if these people would also need to undergo decontamination.

Anatomy of a meltdown

Radioactive leak? What to do

Chief Cabinet Secretary Edano told a press conference televised by Japanese public broadcasting station NHK that the cooling system at a second reactor in the same plant had failed, forcing officials to release radioactive vapor into the atmosphere.

He said at least 210,000 people were being evacuated as authorities expanded the radius of the evacuation area for residents living in the vicinity of the Fukushima from 10 kilometers (6 miles) to 20 kilometers, Kyodo news agency reported.

Public broadcaster NHK flashed instructions to evacuees to close doors and windows, switch off air-conditioning fans and place wet towels over the nose and mouth, as well as to cover up as much as possible.

Edano called for calm as authorities scrambled to contain a partial meltdown at the plant's No. 3 reactor where a failure of the cooling systems briefly exposed the reactor's fuel rods.

Officials said the reactor had been injected with cooling sea water and boric acid which contains the element boron. Boron absorbs neutrons, the sub-atomic particles necessary for nuclear fission, thus slowing the reaction.

"If these measures can be taken, we will be able to ensure the safety of the reactor," Edano said.

Radiation levels outside the plant at one point had hit 1,204 micro sievert per hour, or more than twice Japan's legal limit, he said.