Concern about food, fuel in wake of Japan disasters 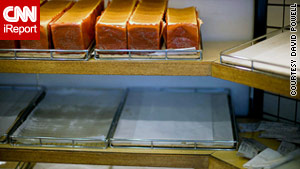 Many stores are low on food supplies after the quake in Japan.
STORY HIGHLIGHTS

Sendai, Japan (CNN) -- Long lines at grocery stores and gas stations along with continued aftershocks and power outages greeted many in Japan on Sunday morning, nearly two days after the devastating earthquake and tsunami that left hundreds dead and missing.

Supplies of food and gas were running out in Sendai, the northern coastal city close to the epicenter of Friday's quake. Those who survived the earthquake and chose to remain in the city were enduring two-hour waits at the supermarket, according to a CNN iReporter in Sendai with the username joeyjenkins.

"They have waited for I don't even know how long to get gas, as the gas station manually pumps the gas since there is no electricity," joeyjenkins wrote, adding they were without power until early Sunday.

Schools and hospitals and Sendai have been turned into shelters, and volunteers were handing out bottles of water, CNN correspondent Kyung Lah reported from the city.

Families searching for loved ones

"I think last night, there must have been something on the news about a power outage," she told CNN, "because when we went, with my friend, we were trying to get flashlights and they were sold out everywhere."

Water, too, was sold out in every store she went to after similar reports of possible water contamination, she said.

Kenneth Cukier, the Japan correspondent for The Economist magazine, said the government announced managed power cuts will start Monday in certain regions of the country -- including suburban areas of Tokyo -- to give businesses enough power to operate.

A seemingly endless barrage of aftershocks from Friday's 8.9-magnitude quake was still rattling nerves Sunday. The U.S. Geological Survey reported more than 140 such quakes -- magnitude 4.5 and higher, with the strongest coming at a 6.4 -- in, near, or off the east coast of the Japanese island.

There have been "many aftershocks," said Yasue Schumaker, a Sendai native who now lives in Hawaii, but was visiting her mother in a Sendai hospital when the quake struck.

"The day it happened, it was constantly aftershock, and last night was better, but still we are having quite big ones," Schumaker said.

The aftershocks are a "constant reminder of what's happened, and what could happen in the future," Wall Street Journal reporter Yoree Koh told CNN from Tokyo.

Such aftershocks are also producing tremendous anxiety for earthquake survivors, reported CNN's Gary Tuchman, driving from the western coastal city of Shonai to Sendai in the east.

"People are wondering, could there be an aftershock that's greater than the original earthquake?" Tuchman said. "Each time you feel it, there's an element of fear."

The Japanese military was working in at least one neighborhood of Sendai on Sunday morning to search for anyone trapped in the rubble. "A few hundred" people were still unaccounted for in one part of town Sunday, Lah reported.

Search-and-rescue helicopters buzzed over Sendai as workers walked through the muddy streets wearing hard hats and carrying shovels. At least one person was winched by chopper from a damaged house.

The city was still littered with debris and standing water from the tsunami. Two to three miles inland, houses were destroyed or simply gone, cars were stacked on top of each other, and brown mud covered the ground, Lah said.

An iReporter with the username xeynon, who described himself as an American living and working in Sendai, said "there are still many friends and acquaintances living along the coast we have not been able to contact."

Schumaker, her voice quivering, said those people should be the priority.

"People who lost their homes, or the people who are still needing help, they are the ones who need help," she said. "We don't have any electric, water, gas, and the city just announced it could take 30 days to get gas set up for everybody. But we definitely need water and food, but please help the people who lost their homes and still ... on top of the buildings asking for help."