Karzai to Petraeus: Apologies are not enough 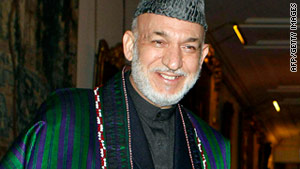 Karzai told Gen. David Petraeus, the commander of U.S. and NATO forces in Afghanistan, that incidents of civilian casualties during coalition military operations are the main reason for tensions in the U.S.-Afghan relationship and he demanded there be no more, according to a statement from Karzai's office.

The comments came in a private conversation between the two men Sunday, according to an official with NATO's International Security Assistance Force who asked not to be named.

Petraeus made a public apology Wednesday for the deaths, which happened the day before in the province of Kunar, along Afghanistan's eastern border.

The incident happened after insurgents in mountains above a coalition base launched a rocket attack that wounded a U.S. civilian, according to U.S. Lt. Gen. David Rodriguez. Troops returned fire and insurgents later shot another rocket at the troops.

Two attack helicopters flew to the location where they were told the rockets originated, identified who they thought were insurgents and killed nine people. Rodriguez said. Later, they found that the slain people were boys cutting wood.

Rodriguez called the incident "a terrible mistake" and promised disciplinary action if warranted.

The statement from Karzai's office said Petraeus repeated his apology Sunday and promised "it will not happen again."

Karzai said the Afghan people are suffering as a result of civilian casualties and that apologizing and condemning these actions cannot ease their pain, according to his office.

"The trust of Afghanistan's government and people definitively depend on this issue," Karzai told Petraeus. Recurrence of such incidents, he said, is "unacceptable."

The NATO force official said Sunday, "We take all civilian casualties very seriously. In light of the recent event that tragically killed nine children, commanders have been given the direction to review our tactical directive that is intended to reduce civilian casualties to the absolute minimum. We will continue to reinforce the need to protect the lives of innocent Afghans as we pursue a ruthless enemy."

Rodriguez said last week such incidents are "rare" when considering all the operations the coalition undertakes. He said a lot of time is spent training soldiers on how to engage the right targets and that directives are constantly reviewed.

"We have done much better preventing civilian casualties," he said. "But we acknowledge we have to do better."

Rodriguez said the military understands families' grief over such deaths, and he said soldiers "feel worse than they can express" when they "do something terrible like mistakenly killing young boys."

"They have to live with that for the rest of their lives," he said.

Karzai previously noted the Tuesday incident occurred less than 10 days after another one "that left many civilians dead in the same province."

On February 20, Kunar Governor Sayed Fazlullah Wahidi said 64 civilians had died in a joint operation by the NATO force and Afghan security forces over several days. The dead included 20 women and 15 children, he said.

Petraeus recently directed military commanders in Afghanistan to review changes meant to minimize civilian casualties. He has ordered commanders to brief helicopter attack crews again on the changes, he said.

CNN's Barbara Starr and Matiullah Mati contributed to this report