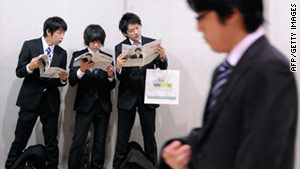 (CNN) -- The number of people in Japan who killed themselves last year because they couldn't find a job jumped 20%, the National Police Agency reported Thursday.

The figures were released as part of the agency's annual study of suicides.

The stark figures stood in contrast to the overall decrease in the number of suicides in Japan, down 3.5% to 31,690. About 127 million people live in the island nation.

Police figures also showed an increase in the number of child caretakers who killed themselves. The number in 2010 grew to 157, up 44% from 2009.

Japan has one of the developed world's highest suicide rates. The Health, Labor and Welfare Ministry says the number of suicides in Japan has been over 30,000 per year for 13 years in a row.

Prime Minister Naoto Kan has made tackling suicides one of his priorities, saying, in the past that he aimed to "reduce the factors that make people unhappy."

But the suicide rate persists, in a society where a stigma surrounds mental health issues.