By Ben Smith, For CNN 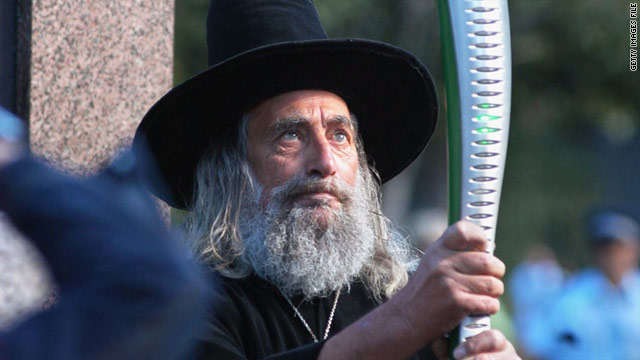 'The Wizard,' as he is known in Christchurch, holds the Queen's baton following a welcome ceremony as part of the Commonweath Games Queen's Baton Relay January 2006.
STORY HIGHLIGHTS

(CNN) -- Christchurch may come back now that the earth-rumbling monster that devoured the city's downtown is gone, but the pointy-hatted, black-robed man who preached almost daily outside the cathedral on his "theory of everything" will not.

The Wizard of New Zealand -- as he is known, and listed in telephone directories -- says he's calling it quits, now that his public stage has been destroyed.

So he is moving down island with his 91-year-old mother to the east coast town of Oamaru.

"Almost every building I really love is gone," he said. "My platform is gone. Without Cathedral Square I can't function. I am heart-broken."

The Wizard, who is otherwise known by his given name, Ian Brackenbury Channell, has been entertaining tourists and fans since 1974. Channell did so first as a wanted soapboxing miscreant evading arrest, and later as an honoraria-paid attraction registered by a local gallery as "living work of art."

Channell was awarded the Queen's Service Medal in 2009 and, during a chance meeting, told Sir Ian McKellen, the actor who played Gandalf in "The Lord of the Rings," how a "real" wizard does the job.

Channell travels with his own special passport that bears the name "The Wizard of New Zealand," according to his website.

Besides being a wizard, the London, England-born Channell is also a comic, teacher and politician with views that are not easily categorized. Soon after arriving in New Zealand, he founded the "Imperial British Conservative Party." Channell, a former sociology professor at the University of South Wales, had previously run three times for Parliament in Australia -- and lost.

At the university, Channell managed to persuade the vice chancellor to declare him wizard of the institution, his website states.

"It felt like being in a cocktail machine," the wizard said.

Magically, perhaps, Channel's house was largely unharmed by the temblor. The wizard shrugged off the suggestion that had he left the house early, he might have been killed.

Thwarted from his daily wizarding duties downtown, Channell said he went knocking about his neighborhood to offer his help and managed to find a dog in distress.

The dog, a Brussels Griffon named Molly, was drowning in water that seeped up from the ground until the wizard stepped in with a rescue that made headlines.

While Channell may have the power to save a drowning dog, saving Christchurch is beyond his magical abilities. He predicted that the old Gothic buildings in the city center will be replaced by skyscrapers.

"Unless they have a change of heart, the heritage and the image of Christchurch will be gone," Channell said.

The wizard's part of that heritage is disappearing for a different reason, he says.

"Young and old are going to the internet," said Channell. "People don't go to the square to exchange ideas so much anymore."

Freelance CTV presenter and Newstalk ZB radio host Mike Yardley gives a first-hand account of the Christchurch earthquake.
Survivor: 'I thought this is it'

"I was finding it hard to breathe, and I really thought that was it for me," said earthquake survivor Anne Vos.
Hi-res images of Christchurch quake

Christchurch resident Rhys Taylor explains how people affected by the quake are aiding each other.
Send your videos, stories

In New Zealand? Then send your iReport photos, videos. Don't do anything that could put your life at risk.
Quake rescues turn to recovery

Many of Christchurch's buildings were badly damaged in the deadly earthquake in New Zealand on Tuesday. TVNZ reports.
New Zealand: An earthquake hotspot

Scientists in New Zealand said there had been less than a one in twenty chance of Tuesday's earthquake being so destructive.