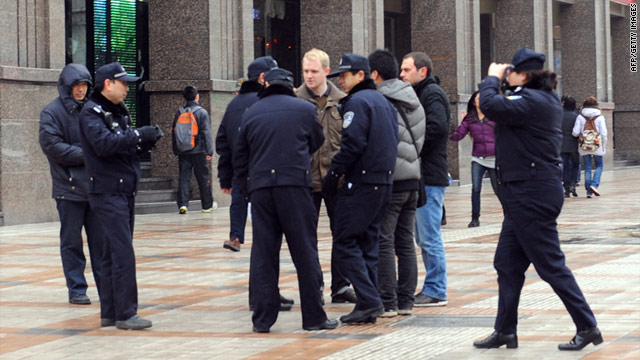 "As far as I understand, journalists did not follow relevant procedures in advance of Sunday. Police were there to provide reasonable guidance," Foreign Ministry spokeswoman Jiang Yu said Tuesday.

"China protects foreign journalists' lawful rights within the law," she said, adding that the ministry hopes "journalists understand that it takes two sides -- both the government and the journalists -- to understand each other, and patiently handle the situation."

The U.S. ambassador to China said Monday that American and other foreign journalists were "illegally detained or harassed as they attempted to do their jobs" while covering protests in downtown Beijing over the weekend.

Ambassador Jon Huntsman Jr. said in a statement that one reporter was "severely beaten and detained for many hours."

"I call on the Chinese government to hold the perpetrators accountable for harassing and assaulting innocent individuals and ask that they respect the rights of foreign journalists to report in China," he said.

Journalists including CNN's Eunice Yoon and Jo Ling Kent were physically harassed by Chinese security Sunday as they planned to cover a protest -- which never took place, perhaps because of heavy police presence.

They were shoved, dragged and at times carried away from the scene. Their cameras were confiscated and footage was deleted, and a press card was taken away from Yoon, who wrested it back from an officer who refused to give his name.

"We found out many other journalists were treated the same and, in some cases, much worse," Yoon wrote. "A former colleague and friend of mine, Steve Engle of Bloomberg News, had been dragged into an alley by several police who beat him up. He ended up at the hospital."

The heavy security was a response to a second weekend in a row of anonymous calls by organizers for a pro-democracy demonstration in Beijing.

Hundreds of Chinese police officers along with more than 120 vehicles flooded Beijing's central pedestrian shopping area, Wangfujing, on Sunday, around the site of a second attempted "jasmine" rally inspired by pro-democracy protests in Tunisia.

There was no sign of protest as the police deployed unusual tactics to prevent demonstrations.