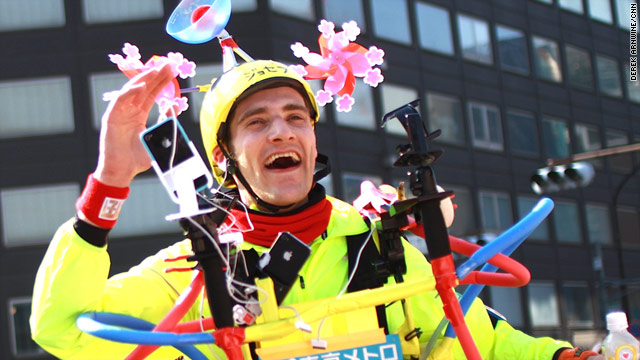 Tokyo, Japan -- The everyman made waves at the Tokyo Marathon on Sunday: Yuki Kawauchi, who works at a high school in Saitama, Japan, grabbed a surprise third place behind the men's winner, Ethiopia's Hailu Mekonnen.

It's a tremendous feat because before today, the running world had never heard of Kawauchi, an amateur runner.

Finishing far behind Kawauchi, but accomplishing a similar feat for the average man was Joseph Tame, completing the marathon at 6 hours and 28 minutes.

It took Tame quite a bit longer to run the same course because at one point, he carried 3,000 people with him.

Not real people, but virtual ones, watching his run on a live stream of Tame's four iPhones.

Tame streamed his entire 42 kilometer, or 26 mile run, via an iPhone pointed at his face and one pointed at the pavement ahead. A third phone was a GPS locator so followers could track his entire run. A fourth phone allowed him to communicate to friends, typing out tweets about his progress.

Those tweets, in turn, were displayed on the iPad strapped on his back.

"This is like one of those crazy challenges where you see people break down and cry," says Tame, as he hit his stride around 10k.

Tame's bold attempts at streaming an entire run via a mobile one-man iPhone center was eclipsed only by his bold attire. Tame donned bright pink plastic toy windmills on a helmet that has little relevance to his internet broadcast and pink bunnies on his sneakers.

It all adds up to pushing the limits of what's acceptable usage of mobile media, says this 33-year-old British citizen who lives in Tokyo.

"When you watch a marathon on TV, it feels a little distant. We really want to immerse people in the experience so they never forget the Tokyo Marathon 2011," he says.

As a producer who works in social networking, Tame says he's pushing the limits of the medium. "It's citizen broadcasting. Can we take live sports event coverage to the next level?"

Like many small ventures in citizen broadcasting, Tame isn't making a dime. His elaborate get-up has come out of his own pocket and some money he's raised will go to the Tyler Foundation, a Tokyo-based children's cancer charity.

This entire endeavor, he says, is ultimately to have fun.

A goal that's readily apparent as Tame sets off on the run, with friends in a mini-control room pushing out his video to Ustream.

The citizen broadcast runs into problems early, from break-up in video to dead batteries, which plague Tame's entire run.

"Broadcasting is a complete nightmare!" Tame says at the half-way point of his marathon. He says his batteries were dying left and right and audio was a persistent problem in the early half of the race.

But Tame remained exuberant even amid the technical troubles, boosted in part by his friends in the mini-control room and a roving pit crew cheering him on.

"I'm studio 3, on the road," says Heather Russell, a friend tweeting and broadcasting via her iPhone.

At the 35k mark, Russell and a few friends have managed to gather up a group of teenage Japanese cheerleaders to root for Tame through the final stretch of the marathon.

When Tame sees them, he's overjoyed. "I'm so surprised! Wow!"

Tame races off, carrying his cameras to the finish line.

"Oh, yes! We did it. We got the metal!" says Tame, though with all his gear, the medal didn't quite fit over the helmet.

But he's also weary, saying it was much tougher than he expected, primarily because he carried 4 kilos or 10 pounds of gear. When asked if he'll do it again next year, he says, "No! Once is enough for this crazy stuff."

Another notable finisher Sunday was Edison Pena, one of the 33 Chilean miners rescued in October after spending 69 days trapped underground.

Pena, who ran the New York marathon in November, finished the race in five hours eight minutes, half an hour faster than his Big Apple time.

During his mining ordeal, Pena famously ran up to 10 kilometers a day through a series of tunnels.