Earthquake survivor: 'I thought this is it'

By Mike Steere, for CNN 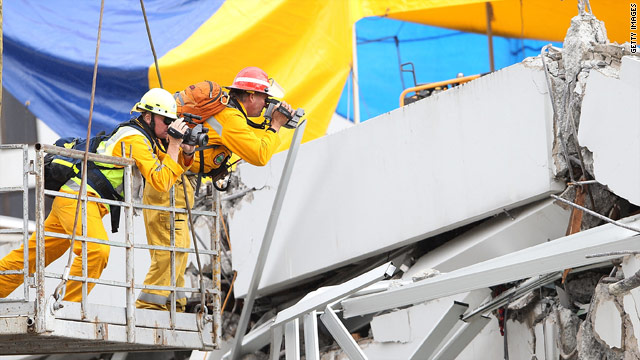 (CNN) -- "I was finding it hard to breathe, and I really thought that was it for me. I thought 'this is it - I'm not coming out of here,'" said earthquake survivor Anne Vos.

She was speaking from her hospital bed in Christchurch, New Zealand, after being rescued from the rubble of a five-story building that collapsed during Tuesday's 6.3-magnitude earthquake.

Vos had spoken to the media on her mobile phone while trapped under her desk in the Pyne Gould Corporation building, drawing international attention to her plight.

She said she remembered vividly the moment the quake struck. She had taken over at the reception desk to allow a colleague to go for lunch, and she was logging onto a computer when the "rumbling" started.

"It happened so quickly. I heard the rumble and then stuff was falling from the ceiling and I thought it was best to go under the desk rather than try to get out. There wasn't any time to think, but I am lucky I didn't go to the stairs. There wouldn't have been time. I don't know what might have happened.

I was more or less saying goodbye. I just wanted to tell people that I loved them and to say goodbye.
--Anne Vos
RELATED TOPICS

"A lot of concrete pieces fell on me and the desk sort of bent completely around. My arm was trapped under a huge piece of concrete. It was starting to swell and I couldn't feel my hand. I couldn't get my feet out, and there was a lot of broken glass and electrical wires so I couldn't move at all. I was stuck there in a little cubby hole," she said.

It was then, in severe pain and struggling to breathe, that Vos realized she may not survive.

She began to call close friends and family on her mobile phone. "I was more or less saying goodbye. I just wanted to tell people that I loved them and to say goodbye."

She was unable to reach her Melbourne-based son, Robert, and she left a goodbye message on his voicemail.

Some time after those initial calls, Vos says she passed out. She was awakened by shaking, but she says she doesn't know whether it was an aftershock or the building further collapsing. Whatever it was, it changed her fortune.

"When I came to, it (the piece of concrete on her) had moved and I was able to wriggle a bit. Once that came off and I could breathe again, I started to think maybe I could I make it. The whole time I was thinking about my family and my friends and I just wanted to make it out. I was hoping someone would rescue me soon."

Vos' next few hours were remarkable. Her son, Robert, gave her number to a Melbourne radio station, and soon conversations with her were being broadcast internationally.

She spoke to the media from underneath her crushed desk until her phone battery died.

Listen to Anne Vos talking to the media

Vos was not rescued until early Wednesday afternoon. She was taken to hospital with cracked ribs, heavy bruising and multiple cuts.

She said the feeling of relief was hard to describe, especially when she saw the state of the building.

"While I was in there I didn't know what was going on. I was just trapped under my desk, you know. When I got out it was such a shock. The building wasn't there anymore. The job the search teams did was just fantastic."

Vos says she now needs to assess the damage to her possessions, and after experiencing two major earthquakes and many aftershocks, she may decide to move away from the area.

There are other anxieties too.

"I am also a bit worried about where I could work. I think I would be too afraid to go into a tall building for a while," she said.

Freelance CTV presenter and Newstalk ZB radio host Mike Yardley gives a first-hand account of the Christchurch earthquake.
Survivor: 'I thought this is it'

"I was finding it hard to breathe, and I really thought that was it for me," said earthquake survivor Anne Vos.
Hi-res images of Christchurch quake

Christchurch resident Rhys Taylor explains how people affected by the quake are aiding each other.
Send your videos, stories

In New Zealand? Then send your iReport photos, videos. Don't do anything that could put your life at risk.
Quake rescues turn to recovery

Many of Christchurch's buildings were badly damaged in the deadly earthquake in New Zealand on Tuesday. TVNZ reports.
New Zealand: An earthquake hotspot

Scientists in New Zealand said there had been less than a one in twenty chance of Tuesday's earthquake being so destructive.