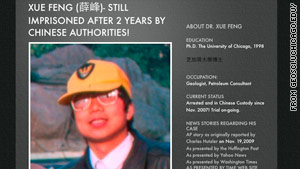 Dr. Xue Feng, a naturalized U.S. citizen, has been sentenced to eight years in prison in China.
STORY HIGHLIGHTS

(CNN) -- The U.S. Embassy in Beijing said Friday it was "extremely disappointed" by a Chinese court decision to uphold the eight-year prison sentence of American citizen Xue Feng.

"I am extremely disappointed in the outcome although it wasn't completely unexpected," said U.S. Ambassador to China Jon Huntsman. "We ask the Chinese government to consider an immediate humanitarian parole of Xue Feng thereby allowing him to get back to his family and his way of life."

The geologist, a naturalized American citizens, was convicted on charges of violating state secrets and faces a fine of 200,000 yuan (about U.S. $30,400). Xue has spent about three years in prison since his arrest.

University of Chicago's Dr. David B. Rowley, Xue's former professor who has rallied for his release, said in July that Xue was languishing in prison on vague charges.

"I find this whole thing just unbelievable in no small part because the rationale is just so thoroughly flawed," Rowley said.

Xue "has always been a straight shooter," Rowley said. "He was not ... a wheeler-dealer type." He is "an honest, hard worker and this came as a real surprise to him as well."

Xue was working in China as a leading geologist for the Colorado-based IHS Consulting firm, a global provider of energy-related information, Rowley said, and the information Xue was privy to did not include state secrets.

While Rowley said he was not privy to the specific database mentioned in Xue's indictment, the professor said the pieces of information commonly contained in such databases are not state secrets.

"These types of databases usually contain information related to the petroleum potential of a given area, and that might include what wells already have been drilled and information on the geology and geophysical or underlying structure of these areas. That's pretty much it," he said.

Xue's job as a leading consultant for IHS involved acquiring and reselling this type of data, Rowley said.

He said that as a petroconsultant, Xue thought he was viewed favorably by the Chinese because he was able to sell to Chinese officials similar data from countries in which the Chinese had drilling interests.

Rowley said Xue had resigned from IHS at the time of his arrest and believed that the warnings issued by Chinese officials concerning the database were not issued against him, but against his employers, he said.

"IHS is extremely disappointed at the news and is very sympathetic to the situation. We are continuing to work with our advisors on the issue," IHS spokesman Ed Mattix at the time of Xue's sentencing in July.