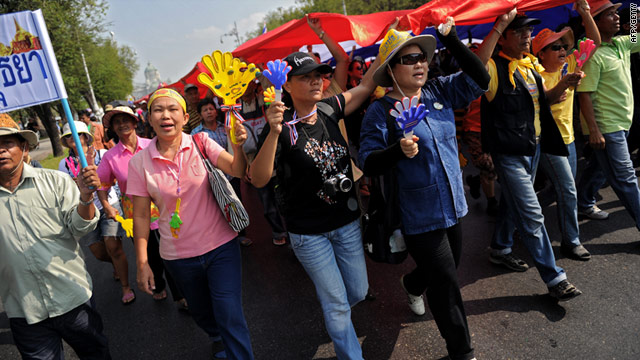 Crowds of hundreds of yellow-shirted protesters shouted "get out Abhisit" as they marched through Bangkok on Friday.
STORY HIGHLIGHTS
RELATED TOPICS

Bangkok, Thailand (CNN) -- Thai yellow shirt protesters on Friday demanded the prime minister's resignation over what they say is his failure to protect the interests of the nation.

Hundreds chanted "get out, get out Abhisit" as they marched toward the statue of the late King Rama V in Bangkok. The king is a legendary figure in the history of the nation's monarchy.

"It was generally peaceful and the march ended quickly," he said.

The nationalist yellow shirts have been demonstrating at major streets in the capital for more than two weeks. They have criticized the handling of the long-running border dispute with Cambodia that has led to deadly clashes recently. Protesters have vowed to retake Thai's land, which they say is lost to Cambodia.

Are you there? Share your story and images with CNN iReport.

Prime Minister Abhisit Vejjajiva once enjoyed support from the yellow shirts, but the relations turned soar after the demands of the nationalist group were not met.