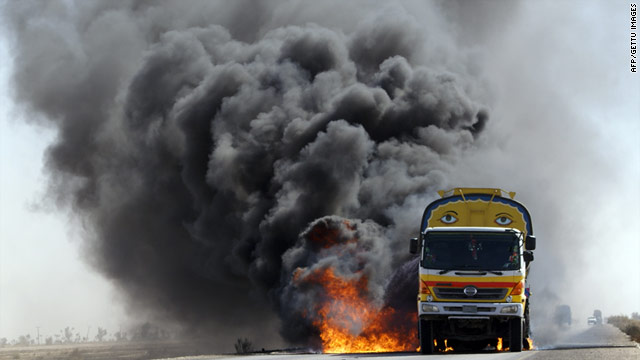 One of the bombs was planted along a road and exploded as a military convoy drove by, said senior police official Muhammad Iftikhar Khan. Two soldiers were killed in the explosion and four others were injured, Khan said. The blast took place in a village in Bannu, a district adjacent to the Taliban strongholds of Pakistan's tribal region along the Afghan border.

About an hour north of Bannu, a roadside bomb in the outskirts of Peshawar killed two policemen and injured two others as they drove by in their police van, police official Amjad Khan told CNN.

A third planted bomb in the outskirts of Peshawar destroyed a parked oil tanker and damaged four others, Khan said.

All five tankers were carrying fuel for NATO troops in Afghanistan.

There was no immediate claim of responsibility, but militants in the region have frequently targeted Pakistani security forces and supply trucks headed for Afghanistan in an effort to undermine U.S. and NATO efforts there.

On Monday, armed militants in southwest Pakistan torched two other oil tankers, said Azam Shahwani, a senior government official in Baluchistan province. No one was injured, but two of the oil tankers were destroyed, he said.

More than half of the supplies for NATO forces in Afghanistan travels through Pakistan.