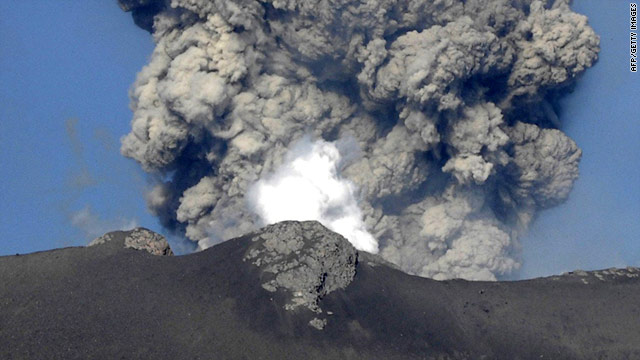 Since January 26 when it broke its decades-long slumber, the volcano has erupted seven times, the agency said.

For many outside Japan, Mount Shinmoe is known for its role in the 1967 James Bond movie "You Only Live Twice," where it served as the lair for the villain, Ernst Blofeld.

In the nearby town of Takaharu, ash blanketed cars, houses and streets, where 1158 residents have been advised to evacuate. Town officials said 614 people so far have fled their homes.

On Tuesday, Mount Shinmoe erupted with an infrasonic wave that shattered windows in houses in the town of Takaharu. Local television reports showed hundreds of people spending the night in gymnasiums, waiting for word that it was safe to sleep at home.

Exactly when that order will come is unclear, meteorologists said.

"People in the area should prepare for the worst case scenario," said Satoko Ohki of the Earthquake Research Institute at Tokyo University.

If they have not heeded the evacuation order, "they need to have a quick evacuation plan ready, with escape routes marked on maps," Ohki said.

Mount Shinmoe showed similar volcanic activity from 1716 to 1717, Ohki said. It was active for three months and then fell quiet for seven months.

Then suddenly, the volcano erupted in a large explosion, spewing 100 million cubic meters of magma, a much larger explosion than anything seen last week from the mountain.

It's impossible to know if Mount Shinmoe will follow the same pattern this time, Ohki said.

The volcano may cease activity soon, continue small explosions which will release all the magma energy, or this could be the prelude to a very large volcanic eruption, she said.

Japan is home to approximately 10% of the world's volcanoes.