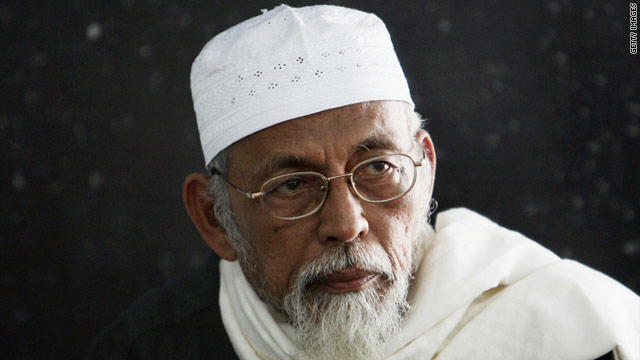 Authorities have tried and failed to directly link cleric Abu Bakar Bashir to several major terror attacks in Indonesia in the past.
STORY HIGHLIGHTS
RELATED TOPICS

The charges include funding and inciting others to terrorism and planning and attempting acts of terrorism. Under the country's anti-terrorism law, some of these charges carry the maximum penalty of death, according to a statement by the Attorney General's Office.

Bashir was first detained in August for his suspected links to a militant training camp raided by authorities in the province of Aceh in early 2010.

Police say Bashir and his relatively new organization, the Jamaat Tawhid Anshoru or JAT, was involved in setting up the camp. The militants were preparing to launch attacks similar to the one in Mumbai 2008, and assassination attempts on Indonesian government officials, authorities have said.

Under the law, Bashir's detention was set to expire on February 10. One of Bashir's lawyers, Adnan Wirawan, said the trial may start in about two to three weeks.

He stressed that "all the charges are very weak. This is again something that law enforcers fabricated," Wirawan said.

In the past, authorities have tried but failed to directly link Bashir to some of the major terror attacks in Indonesia.

This would be his third trial. In the first two trials, prosecutors tried to directly link the elderly cleric to the 2002 bombings in Bali and the 2003 JW Marriott bomb attack in Jakarta.

The courts found him guilty of relatively minor charges. He was released in June 2006, after serving 25 months in jail.

Bashir is known for his fiery rhetoric. He was accused of being the spiritual leader of Indonesia's homegrown terror network, Jemaah Islamiyah, who inspired many of those involved in the bombings.

Bashir has always denied all the allegations and often blamed a U.S.-led conspiracy to put him behind bars.