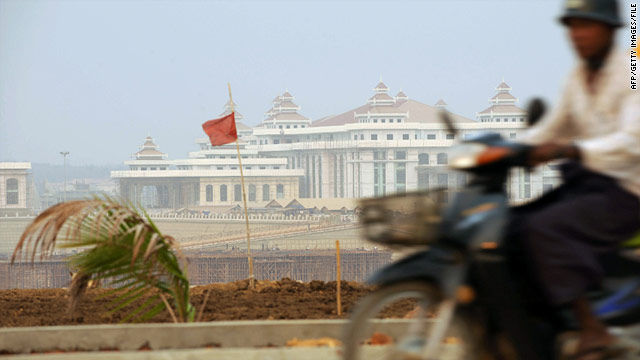 A man rides his motorcycle past Myanmar's new parliament in Naypyidaw in this file picture.
STORY HIGHLIGHTS
RELATED TOPICS

(CNN) -- Myanmar convened its first parliament in more than two decades on Monday in the capital, Naypyidaw.

Members are expected to vote for chairman and vice chairman during the session.

November's elections, which were also the first in 20 years, drew fire from critics, who said the voting was aimed at creating a facade of democracy.

The military junta also recently overhauled Myanmar's constitution in a way that critics say was aimed at tightening the regime's grip. The constitution now requires more than 100 military nominees in parliament.

"A good communication system is essential to our endeavour to set up a people's network for democracy that will span the whole world," Suu Kyi said in a message on the site, which went live Sunday.

"By communication, through the web page, with strong supporters of our cause, as well as with those who want to know more about our movement for democracy and about the NLD, I believe we shall be able to achieve our goal of a democratic union at a faster pace."

The web address for the site is: www.nldburma.org.

The daughter of General Aung San, a hero of Burmese independence, Suu Kyi has repeatedly challenged Myanmar's regime over the years. For her efforts, she won the 1991 Nobel Peace Prize.

She was released from house arrest on November 13, after spending most of the past 20 years under house arrest or in prison. Her release came after the national elections which her National League for Democracy party boycotted, describing them as a sham.