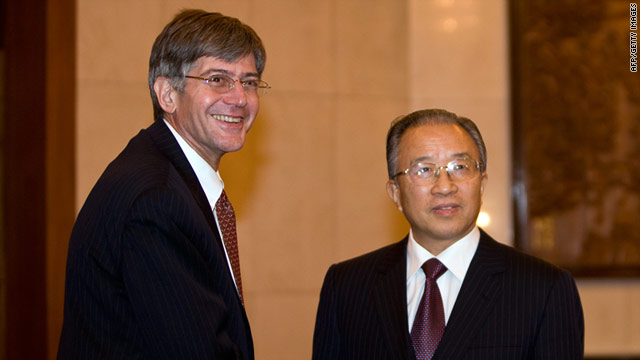 (CNN) -- Less than a week after Chinese President Hu Jintao visited Washington, senior diplomats from China and the United States sat down in Beijing Friday to follow up on the visit and discuss other issues.

The two were expected to discuss tensions between North Korea and South Korea and U.S.-China relations, among other issues.

"This year is the year of the rabbit, so we have to work very fast." Steinberg said at the beginning of the meeting, which was later closed to reporters.

"The year of the rabbit is auspicious," Dai said. "I'm confident this year will be even better for U.S.-China relations. I am hoping this new year the world will be a more tranquil place. Please convey my greetings to Secretary [of State Hillary] Clinton."

The two met behind closed doors at the White House for several hours as top officials from both countries worked to address issues tied to the global economic crisis, international security, the environment and human rights.

Obama administration officials used the president's meeting with Hu to highlight economic progress between the two countries, announcing Beijing's approval of $45 billion in new contracts for U.S. companies to export goods to China. The contracts will support an estimated 235,000 American jobs, according to the White House.

The two leaders acknowledged continuing differences on human rights, but pledged to keep working on the matter in a "frank and candid way," according to Obama.