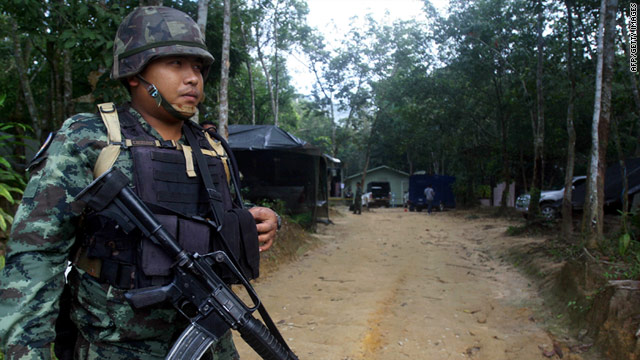 Bangkok, Thailand (CNN) -- Nine civilians were killed and two others were injured Tuesday in a bombing in southern Thailand, a region that has seen recent insurgent attacks, an official said.

The bombing occurred about 5:25 p.m. (5:25 a.m. ET) in the Yaha district of Yala province, said Col. Prinya Chaidilok, spokesman for the 4th Division of the Internal Security Command.

Prinya said he was surprised that civilians were targeted. "Usually insurgents will aim at officials," he said. Insurgents might have mistaken a pickup truck loaded with villagers for a military vehicle, he said.

Last week, an insurgent attack on a Thai military camp in Maruebotok Village of Narathiwart province killed four soldiers and wounded six others, Chaidilok said. The military had been warned of an impending attack, he said, but believed insurgents would aim at a small temporary post, not a permanent camp.

Muslim separatists in southern Thailand have long battled government forces in a country that is overwhelmingly Buddhist. The conflict came to a head in 2004 after former Prime Minister Thakin Shinawatra took office. Several thousand people died in the resulting violence.