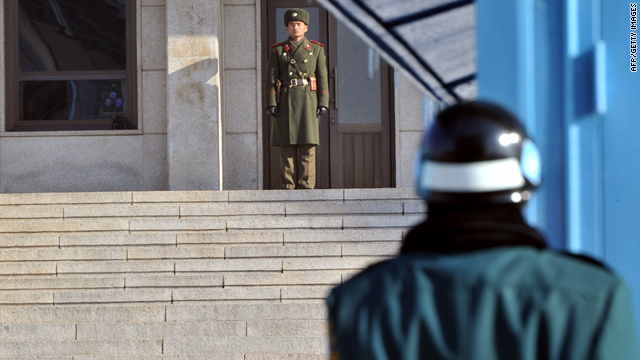 A North Korean soldier, center, and a South Korean soldier stand guard at the truce village of Panmunjom in the Demilitarized Zone separating the two Koreas on January 19, 2011.
STORY HIGHLIGHTS
RELATED TOPICS

The meeting would take place at the truce village of Panmunjom, South Korea's Yonhap news agency reported, and is aimed at paving the way for higher-level military talks.

The South will demand that Pyongyang take responsibility for last year's military provocations and promise not to carry out any more attacks, the unification ministry said.

The ministry said this month that it had reopened communication channels with North Korea in the border area of Panmunjom. The date and venue for the preliminary talks were communicated via a military line there, Yonhap reported.

It was the first time in eight months the two sides reopened the hot line. North Korea cut it off May 26 to protest Seoul's response to the March sinking of a South Korean naval ship.

South Korea also proposed separate high-level talks with North Korea to discuss the issue of denuclearization, a request the North has not responded to, the unification ministry said.