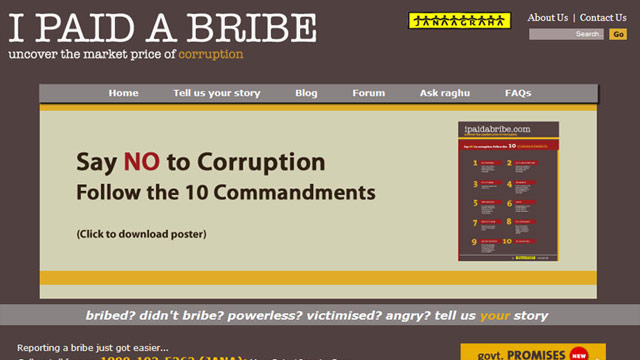 New Delhi (CNN) -- In India if you ask citizens about corruption almost everyone has a story. Bribes and kickbacks have become a part of everyday life for many.

"Every day, I see corruption. So, even if we need licenses and all that, it's something you put on the table first and then the license comes," marketing executive Rachit Kapoor said.

"If you go to a government hospital, you will not be admitted for treatment unless you know some employee or you bribe staff," said Deepak Kotwol, from Delhi. "Your building plans will not be passed until you bribe municipal officials. This has become part of life now."

Now there's a website for citizens to vent their frustration, without fear of retaliation. They can click on a link at Ipaidabribe.com and tell their story.

"If you look at the kind of reports that come to us, the emotions of the people who report an experience are of disgust, of anger, of fear," said Raghunandan Thoniparambil, who helps run the site through a non-profit organization called Janaagraha.

"There are two kinds of corruption. We are basically looking at over-the-counter corruption, what is very widespread but perhaps relatively small amounts but that affects citizens directly. And then you have grand corruption, what happens behind closed doors, people are taking huge bribes, there is a feeling that huge bribes don't affect citizens so it's okay, these things happen. But I don't think so; I think that has very serious implications to the country. And I think one of the biggest problems in India is that our corruption laws are extremely weak," Raghunandan Thoniparambil said.

Every day, I see corruption. So, even if we need licenses and all that, it's something you put on the table first and then the license comes.
--Marketing executive Rachit Kapoor
RELATED TOPICS

"Raghu," as Thoniparambil is known on the site, says the website is not a place to shame individuals. It was set up to kick out any names of individuals but record the department or company where the bribe was taken or requested. The idea is to capture information that can be used for systemic change, Thoniparambil said. The group has already submitted some of their findings to the government.

Raghu was a long-time government employee and said he has watched corruption grow into a monster.

By coincidence, ipaidabribe.com was set up last summer just as a season of alleged scams unfolded in the country. The cases are still being investigated.

Then came the Commonwealth Games and allegations of kickbacks and mis-spending.

The largest of all scandals followed. The so-called 2G scam, where lucrative telecommunications bandwidth was sold at 2001 prices allegedly by a government minister, who has denied all the charges.

According to the government, the estimated cost of that scandal alone is $40 billion in lost revenues.

Last but not least there was a scandal over an apartment building that was supposed to provide housing for widows of fallen Indian service members. Instead, some of those apartments were allegedly given to un-qualified government officials.

India's ruling political coalition is scrambling to try to save its reputation in the light of all the scandals.

"I think the fear is that India would be seen as what Rattan Tate said is a banana republic, you see, where anything can be done at a price. And that just creates such a wrong impression," said Rajiv Kumar, director-general of the private Federation of Indian Chambers of Commerce and Industry or FICCI. He believes India as a whole is a law-abiding country but said the recent corruption scandals are threatening to tarnish its image.

"It really hurts a lot at a time when India is attempting or is seen as joining the high table for global governance. So you don't want a country with a mixed record on corruption and governance at home to be now becoming a member of the high table for global governance. That's where that hurts and another one hurts in our growth prospects." The reason, he believes, is that it creates uncertainty, and uncertainty can scare off potential investors.

Analysts said as India rises in economic dominance its leaders need to worry about governance at home or risk India's chances of becoming a world leader.