Hu to lay out vision for U.S. relations 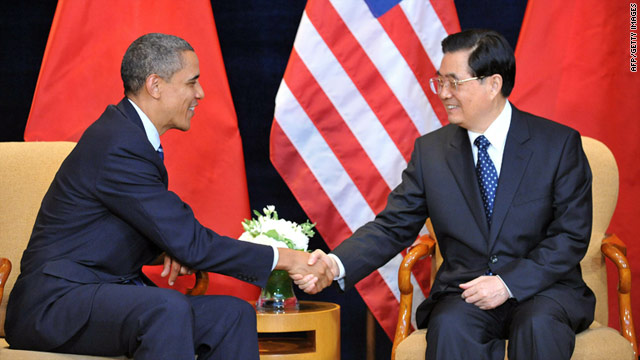 Presidents Barack Obama and Hu Jintao will try to patch up frayed economic ties when they meet in Washington this week.
STORY HIGHLIGHTS
RELATED TOPICS

(CNN) -- Chinese President Hu Jintao this week will lay out his vision for U.S.-Chinese relations based on strategic mutual trust, state-run media reports, amid recent hints of Washington's frustrations with Beijing.

Hu is expected to lay out his blueprint during his three days in Washington, where he'll meet with President Barack Obama, top legislators and business executives, followed by a stop in Chicago.

A report Sunday in Xinhua, China's official news agency, said that despite certain differences a constructive, comprehensive partnership between the powers could be mutually beneficial and help ensure stability in Asia and worldwide -- points Hu will stress during time in the United States.

Zhang Yesui, China's ambassador to the United States, hyped the visit as vital to relations between the Communist state and democratic power, according to another Xinhua report published Saturday.

Official: China not a threat to U.S.

He said that it was important to continue bilateral ties and address issues through dialogue, while adding that disagreements were inevitable given political, cultural and economic differences. Ultimately, Zhang said, the nations can and should create a "win-win situation" through positive diplomacy.

This hopeful rhetoric, though, comes as officials in Washington have recently suggested that Beijing has been slow to act in some respects, and generally should consider altering its approach to reflect its increasing influence.

On Friday, a U.S. delegation sent to China to negotiate economic deals returned from a three-day trip "highly disappointed" with the lack of progress, according to a senior administration official.

The official, displaying obvious frustration, told CNN that "prospects for a joint economic statement" before Hu's visit to the White House "are hanging by a thread."

Typically the joint statement is a formal expression of agreement between the two countries. A failure to issue one is often considered a sign of failed diplomacy.

"That doesn't mean things can't improve," the official said, "but we haven't seen it yet."

In a speech at the State Department Friday, U.S. Secretary of State Hillary Clinton said that China must assume the responsibility of being a world power, rather than basing policies on its own self-interest.

"Embracing the obligations that come with being a 21st-century power will help to realize a future that will give the Chinese people even more, in fact, unimagined opportunities," she said. "But that means accepting a share of the burden of solving common problems, abiding by and helping to shape a rules-based international order."

Clinton acknowledged that relations between Beijing and Washington were at a "critical juncture," noting persisting tensions on economic and security issues and accusing China of discriminatory practices that put American firms at a disadvantage.

Still, insisting that the United States doesn't view China as a threat, she said, "our economies are intertwined and so are our futures."

One hot-button issue that Beijing addressed on Sunday was the Korean peninsula, days after Clinton urged China to use its "unique ties" with North Korea to tamp down tensions there.

Urging an early resumption of long-stalled six-party talks committed to reining in North Korea's nuclear program, Assistant Foreign Minister Hu Zhengyue told Xinhua that "the peninsula's denuclearization and the normalization of relations" was in all parties' interest.

"China will continue to work with all the parties concerned and the international community to ensure peace, stability and prosperity," he said.