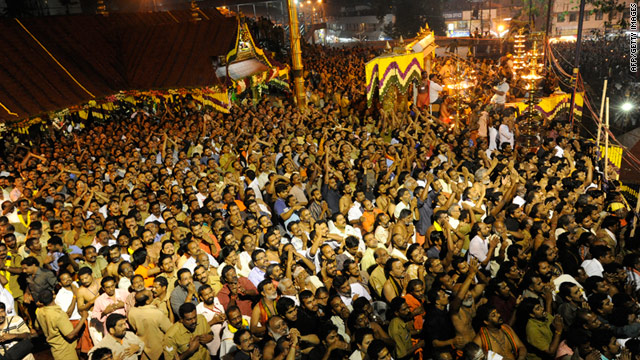 Hindu devotees pray at the Sabarimala temple during the Maravilakku festival in Kerala.
STORY HIGHLIGHTS

Pilgrims were returning from a Hindu ritual at a temple when a vehicle overturned, prompting the stampede, said Jai Kumar, home secretary of Kerala state. At least 14 people were injured.

Video footage showed authorities loading up bodies in large pickup trucks. Onlookers gathered around, looking at the pile of bodies as some took pictures and sobbed.

The incident occurred about 5 miles from the Sabarimala Temple, Kumar said.

The vehicle struck many of the people in a narrow stretch through a forest, the news agency Press Trust of India reported.

Last March, more than 60 people were killed during a stampede at a temple in the Uttar Pradesh state.