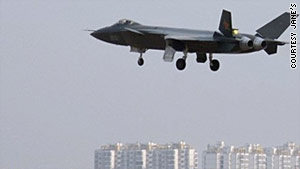 Analysts think the J-20 fighter will have the radar-evading capability of fifth-generation fighters made by the U.S.
STORY HIGHLIGHTS

(CNN) -- China took its latest powerful toy, a new stealth fighter jet, out for its first test spin Tuesday, leading U.S. Defense Secretary Robert Gates to wonder whether the flight was scheduled to coincide with his visit.

"I asked President Hu (Jintao) about it directly," Gates said at a briefing with reporters in Beijing. "And he said that the test had absolutely nothing to do with my visit and had been a pre-planned test. And that's where we left it."

Images and videos of China's latest generation fighter, being called the J-20, hit the web in a frenzy of excitement in late December. Onlookers outside the airfield base have been allowed to use cell phones to snap pictures and record low resolution video, a decision that many experts point to as a move by China to pump its chest in advance of Gates' trip to China and Hu's visit to the United States next week.

Tuesday's test flight appeared to be no different in regard to the viral marketing. Videos and pictures have hit the web, some showing crowds of people lined up alongside the airfield gate in southern China, cheering and jumping up and down as the fighter lands.

Gates however, who made the trip to discuss military relations between the United States and China, said he believes the Chinese president's assurance that the test flight had been previously planned.

"I take President Hu at his word that ... the test had nothing to do with my visit," Gates said.

One China watcher is skeptical.

"It was planned this way, a classic exercise in power projection," said China military scholar Richard Fisher. "They want President Obama and the new Congress to view Hu Jintao, who visits next week, as the leader of the next military superpower, whose demands must be accommodated."

Analysts believe the J-20 stealth fighter will have the radar-evading capability of fifth-generation fighters produced by the United States, like the F-22 and F-35. And while the jet isn't supposed to be operational until at least 2017, Fisher said that after Tuesday's test flight, China has the potential to deploy the fighter at an earlier date using a less-powerful engine than the one currently in development.

Gates conceded that fact on his flight over to China last weekend.

"I think that what we've seen is that they may be somewhat further ahead in the development of that aircraft than our intelligence had earlier predicted," Gates said. Still, Gates downplayed the technical advancements in the plane, questioning how "stealthy," or radar evading, it actually is.

In 2009, Gates said that no nation comes close to the United States' air power, and he expected the Chinese to have only "a handful" of fighters that could challenge the U.S. advanced fleets by 2025.

Despite Tuesday's air show by the Chinese, Gates said he would not revise that assessment and added that another Asian power, Japan, is considering purchasing its next generation of fighter aircraft.

"And I might have a few suggestions for them," Gates said.