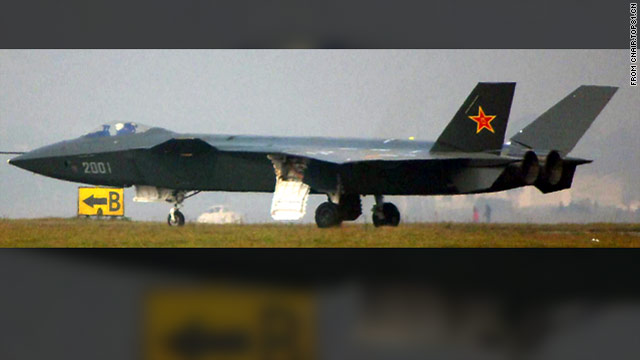 The new Chinese stealth fighter jet, known as the J-20, isn't expected to be operational until at least 2017.
STORY HIGHLIGHTS
RELATED TOPICS

(CNN) -- Images believed to be of China's next generation of military air power have been buzzing around the internet, but Pentagon officials are insisting it does not mean China has matched American air capabilities.

The new Chinese stealth fighter jet, known as the J-20, isn't supposed to be operational until at least 2017, but a Chinese air force commander told Chinese TV in 2009 that flight testing would begin much sooner. Stealth jets, such as the United States' F-22, are designed to evade detection by radar and anti-aircraft defenses.

Now unknown sources have posted photos of what appears to be the plane on an airfield runway in southwestern China.

"We are aware of their plans to develop this fifth-generation fighter," Pentagon spokesman Col. Dave Lapan said Wednesday. "The photos that were released recently are presumably of some taxi testing."

At a Thursday briefing, Chinese foreign ministry spokesman Hong Lei declined to comment on reports on China testing the jet.

"China insists on a path of peaceful development," he said. "We have adopted a national defense policy that is defensive in nature and do not threaten any other countries. China has been an important force in maintaining regional and global peace."

The emergence of the photos comes as Defense Secretary Robert Gates heads to China this weekend to discuss the military relationship between the U.S. and China. And later this month, President Hu Jintao will go to Washington for a summit with President Barack Obama.

One China watcher says Beijing's failure to censor the grainy images on the web proves the photos are of the new jet and the country wants them to circulate.

"The Chinese military and the police could have swept the area around the airfield very easily, but what they've done is they've controlled this. They've allowed Chinese to only take photos with cell phones, meaning that the photos that we have are low-resolution, do not give us a great deal of detail about the aircraft and they're put on the web with a low-resolution format," said China military scholar and author Richard Fisher. "The response within China has been overwhelmingly positive and has spurred national pride to an enormous degree."

The Pentagon is taking a low-key approach to the surge in publicity about the Chinese fighter, saying their existing top-of-the-line warplane has engine problems and that their next plane is years away. But Fisher says that timeline could be sped up if the Chinese buy an engine from Russia as opposed to developing it themselves.

"It's something that is in some form of development, as a fifth-generation fighter. As I noted, the Chinese are still having difficulties with their fourth-generation fighter," Lapan said in an off-camera question session with journalists in his office.

And he said that while the new jet was not mentioned in the Pentagon report on China that was sent to Congress in August as an annual update for China's defense capabilities, the Defense Department has talked about it.

Fisher, however, says it should be a concern, citing the Chinese jet's potential ability to overtake that of America's F-22 in thrust and "supercruise" speed, which is the ability to fly supersonically without using fuel-guzzling afterburners.

"We can't say precisely what the capabilities are, but we have a good idea. Right now, we should be reviving production of the F-22 and not just reviving production, we should be developing an advance version of the F-22," said Fisher. "And sadly, even though it is a troubled program, already the F-35 needs another rework. It needs to be made competitive with this fighter."

The F-22 was scaled back in production in 2009. The production of the F-35, which is being developed and tested, could be slowed under Gates' budget-cutting initiative.

In 2009, Gates said that no nation comes close to the United States' air power, and he anticipated the Chinese having only "a handful" of fighters that challenge the U.S. advanced fleets by 2025. But Fisher cautions that this Chinese jet could cause a change in the balance of power in the Pacific.

"Since World War II, the American military has never gone into battle without the assurance of air superiority. China is a rising power, and it is determined to challenge the American position globally," said Fisher. "This fighter will allow them to do that on a military level... and from my perspective, that's simply unacceptable."

CNN's Steven Jiang in Beijing contributed to this report.