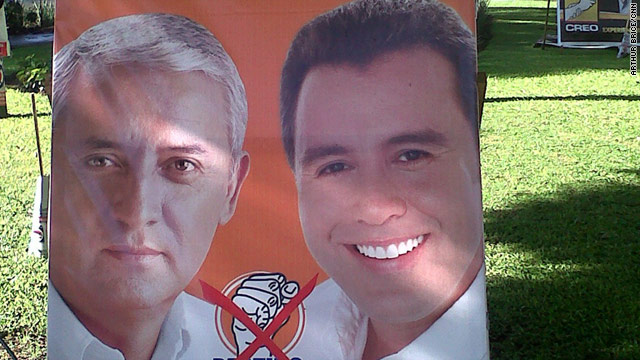 A campaign sign for Otto Perez Molina, left, who is leading in the polls in Guatemala's presidential election.
STORY HIGHLIGHTS
RELATED TOPICS

Guatemala City, Guatemala (CNN) -- Guatemalans voted Sunday in a presidential election that could put a retired army general in power.

Long lines of voters surrounded polling centers across the Central American nation, where proposals to deal with widespread violence and the growing threat of organized crime have figured heavily in the campaigns of 10 candidates vying for the country's top job.

If no candidate receives more than 50% of votes, there will be a runoff election on November 6. The new president takes office in January.

Polling centers closed at 6 p.m. (8 p.m. ET), though people who had not voted but were already in line will still be allowed to cast their ballots. The state-run AGN news agency reported long lines in locations throughout the country. Results are expected later.

Polls before Sunday's election favored Otto Perez Molina, who has pledged to bring a "mano dura" -- firm hand -- to Guatemala's highest office. If elected, Perez Molina says he will focus on fighting crime and poverty.

In a debate co-hosted by CNN en Español last month, the former military general called for "elite units of the army" to play a larger role in the nation's battle against gangs and drug cartels.

But that proposed approach -- and Perez Molina's high rank in the military during Guatemala's decades-long civil war -- worries human rights groups both in Guatemala and abroad.

"These groups have begun questioning his military past and his participation in the war against the insurgents during the armed conflict. Undoubtedly, this issue will be present during his presidency if he wins the elections," said Miguel Castillo, a political analyst at Guatemala's Francisco Marroquin University.

Concerns stem from the fact that the Guatemalan military committed multiple atrocities during the civil war, though Perez Molina has never been directly implicated in any of them, Castillo said.

Perez Molina is campaigning for president for a second time. He was defeated in 2007 by incumbent president Alvaro Colom.

"We are proposing the change that is necessary in Guatemala and we are ready to propel it forward," Perez Molina said during last month's debate.

Although there were more than 10 presidential candidates on Sunday's ballot, in addition to Perez Molina there were only two others with a realistic chance of winning the presidency.

Manuel Baldizon, 41, is the youngest of all the presidential candidates.

The Guatemalan constitution doesn't allow anybody younger than 40 to run for the high office.

Baldizon, a businessman and attorney running under the banner of the Leader Party, has energized young people.

Baldizon's campaign slogan was "Only the people can save the people." He espouses a concept he calls "renewed democratic liberty" where all members of society have a role to play in seeking solutions to common problems.

Perez Molina's other main opponent was Eduardo Suger, 72, an intellectual who is proposing a comprehensive approach to tackle Guatemala's problems. His party is called CREO, a Spanish acronym for the words commitment, renovation, and order.

"Everything is tied together," Suger said. "When we speak about childhood malnutrition, we're also talking about the economy because poverty creates many of those problems. To fight poverty, we need to address health care, education, and infrastructure."

Poverty is endemic in Guatemala, and the country has one of the worst crime rates in Latin America. Forty-three percent of children under five are chronically malnourished. And the murder rate last year was 42 per 100,000 people -- one of the highest in the world.

A Vox Latina national survey in July found that more than two-thirds of Guatemalans said violence was the issue that concerned them most, far outpacing the combined totals for the economy, unemployment, poverty and lack of education.

This is only the fourth time that Guatemala has held presidential elections since peace accords were signed in 1996, officially ending a civil war that devastated the Central American country for 36 years. The conflict left more than 100,000 people dead and a million refugees.