Hero of Mexico casino blaze is offered job as firefighter 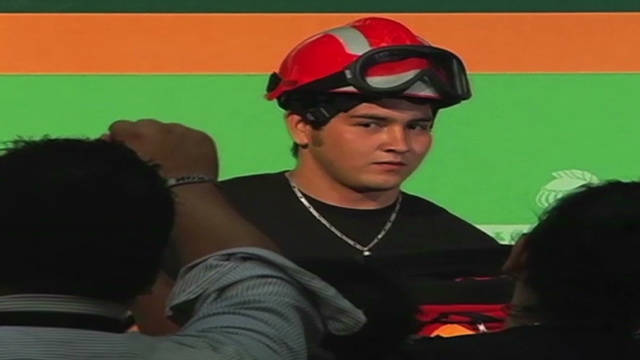 (CNN) -- A 19-year-old parking attendant who is being hailed as a hero for his actions in the deadly Mexico casino blaze in August is now pursuing rescue work in an official capacity, as a firefighter.

Juan Carlos Rocha was working as a valet parking attendant outside a casino in Monterrey when he heard people screaming inside the building and saw black, thick smoke billowing from the facility.

"All of a sudden people started coming out of the personnel entrance asking for help, and that's when I decided to go help them," says Rocha.

Five suspects have been arrested in connection with the August 25 blaze at the Casino Royale, all identified as members of the Zetas drug cartel. The men told investigators they carried out the attack because the owners of the casino had not complied with their extortion demands. A Mexican state police officer has also been arrested.

The fire killed 52 people, the deadliest single attack on civilians yet in Mexico's 5-year-old drug wars.

Rocha has been recognized for saving dozens of lives from the smoke and flames, and was honored recently at the Governor's Palace in Monterrey, the capital of the Mexican state of Nuevo Leon.

"Because of his determination and courage, I'm publicly recognizing Juan Carlos and I want to welcome him to the Civil Protection team as worthy member of this professional team," Medina said.

As it turns out, Rocha's longtime dream was becoming a firefighter and he accepted the offer immediately. It was also good news for him since the destruction of the casino had left him without a job.

Rocha has started firefighter training right away. He says he enjoys everything regarding his training, but the most important thing is that he will be able to help people in need.

Rocha faces a rigorous, three-month basic training course at the firefighter academy. After that he still has to enroll in specialized courses, depending on whether he wants to work as a firefighter or as part of a search and rescue team.

Ramiro Lopez, Operations Commander of Civil Protection in Monterrey and Rocha's new boss, says the young man has what it takes to succeed. "He's got the attitude and the will power. He's also a very noble person," Lopez says.