Lifetime pensions awarded to 14 of the trapped Chilean miners 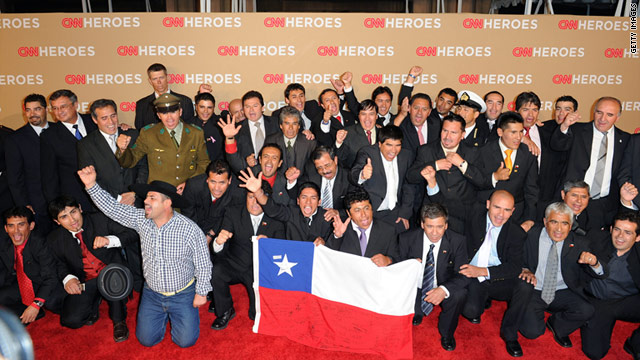 (CNN) -- Fourteen of the 33 Chilean miners who were trapped underground for more than three months after a mine collapse in northern Chile will get lifetime pensions.

Chilean first lady Cecilia Morel met with the 14 miners Tuesday to deliver the news at a ceremony held in the town of Copiapo, near the site of the San Jose mine collapse.

"When the accident happened, we put all of the resources available to us to rescue you. We accompanied your families every moment and we could not abandon you to fate afterwards. This government is committed to be with you and help you as much as we can," Morel said in awarding the pensions.

The Chilean government chose the miners who will receive the lifetime pensions based on their health, age, and the opinion of the group of survivors, officials said.

The ceremony at the Atacama Regional Museum was also attended by Chilean Mining Minister Hernan de Solminihac. The minister said the government is also helping the miners who lost their job when the mine collapsed.

"Following the instructions of the president, we made a great effort to compensate more than 200 workers at the San Jose Mine so that they could receive this benefit before the first anniversary of the accident and we have fulfilled that commitment," Solminihac said.

Morel reflected on the ordeal that the miners have been through. "Now we see that they're all alive and well, but this trauma didn't happen in a vacuum. They became famous due to a disaster that is still negatively affecting them. That's why they need this help, which will be one more step towards their recovery," she said.

In spite of becoming famous after surviving the mine collapse, life hasn't been easy for the miners. Several are still unemployed. Others are surviving by selling fruits and vegetables on the streets of Copiapo, driving taxis or doing odd jobs. The most successful ones have gotten into public speaking, but the money and the opportunities are likely to dwindle as years go by.

Jorge Galleguillos, one of the survivors, said earlier this month that the good will from their country faded fast. "They love us more abroad. They congratulate us, they want to touch us and get a blessing from us. That's not the case in Chile. Only a few greet us with affection; many more say 'hi' with envy," Galleguillos said.

Galleguillos was one of four miners who traveled to Washington, D.C., in early August to open an exhibit about the mine collapse and subsequent rescue at the Smithsonian Institution.

Author Jonathan Franklin, who wrote a book about the miners called "33 Men" and who did extensive interviews with them, says recovery hasn't been easy.