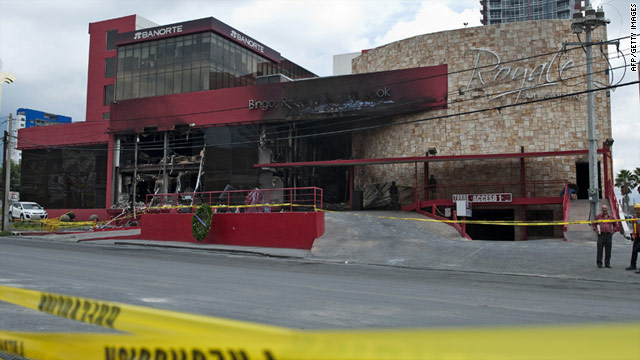 State media said the five men confessed to carrying out the attack at the casino that left at least 52 people dead.
STORY HIGHLIGHTS

The five are members of Los Zetas and carried out the attack because the owners of the casino had not complied with their extortion demands, Medina de la Cruz said, according to the state-run Notimex News Agency.

The five have been arrested and "have confessed, and we have scientific proof that these people participated," Medina de la Cruz said.

"Presumably, there was a disagreement and this crime was perpetrated as a reprisal," Medina de la Cruz said.

At least two other people were being sought for alleged participation in the killings, he said, adding that he would not reveal details that might jeopardize the investigation.

The attack appears to have been directed at the casino and not at city residents, "and the situation got out of the criminals' control."

"They may not have counted on killing 52 human beings," he said.

Medina de la Cruz, who was accompanied at the news conference by Nuevo Leon Attorney General Leon Adrian de la Garza, and the state's security spokesman, Jorge Domene, underscored that the investigation into the casino properties is continuing.

It is evident that we are not facing common criminals.
--President Felipe Calderon
RELATED TOPICS

The governor presented a video that he said showed two vehicles that participated in the attack, with people putting gasoline in tanks later used at the casino.

He added that a fingerprint taken from one of the cars led investigators to one of the suspects and, from him, to the others, who have criminal records that include homicide and kidnapping, among other offences.

He called for any witnesses who may recognize the suspects to contact authorities.

Mexico's Attorney General's Office had offered a 30-million peso ($2.4 million) reward for information leading to the capture of the men they suspect were behind Thursday afternoon's attack in the affluent city.

The ambush left a charred shell of a building where the high-end casino had stood. Photos of the scene at the Casino Royale showed singed slot machines. A video released by Mexican authorities showed armed men bursting into the casino carrying what appeared to be gallons of gasoline. Seconds later, dozens of people fled as smoke and fire engulfed the building.

The number of victims in the casino attack drew national attention in a country where headlines routinely describe brutal drug-related violence.

"It is evident that we are not facing common criminals," Calderon said Friday. "We are facing true terrorists who have crossed all the limits, not only of the law, but also of common sense and respect for life."

Over the past three years, the state of Nuevo Leon in northeastern Mexico has seen an increase in violence due to clashes between rival gangs -- the Gulf Cartel and The Zetas -- over control of drug-trafficking routes to the United States.

Two mayors were assassinated in 2010. Last month, four civilians were wounded when two grenades were thrown at a prison in Apodaca.

Monterrey, the state's capital, is a key industrial hub and Mexico's wealthiest city.

Since 2008, the government has stepped up the military's presence in Nuevo Leon as it tries to crack down on crime. It sent more troops to the state last November.

More than 34,600 people have died since Calderon announced a crackdown on cartels in December 2006, according to government statistics. Other reports have listed higher tolls. The latest Mexican government tally was released in January.