52 killed in attack at Mexican casino 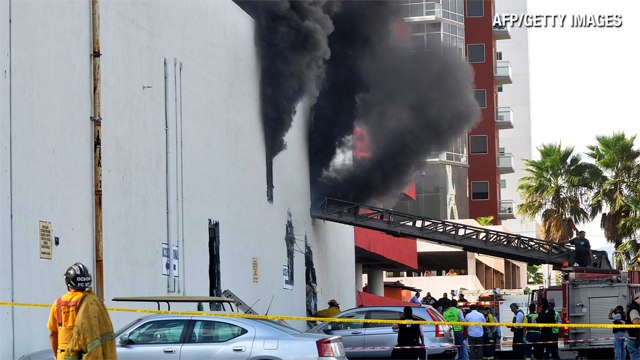 (CNN) -- Mexican President Felipe Calderon condemned Friday the torching of a Monterrey casino that killed at least 52 people as "the most serious attack on civil society that the country has seen in a long time."

Calderon said the burning of the Monterrey Casino Royale on Thursday was perpetrated by "terrorists" motivated by greed.

Meanwhile, authorities in the northern state of Nuevo Leon, of which Monterrey is the capital, released a video showing how armed men arrived in three vehicles and were carrying what appeared to be gallons of gasoline.

They burst into the casino, and seconds later, dozens of people fled the casino, which was clouded with smoke and fire. The attack lasted two and a half minutes, according to the video released by Secretary of the Interior Francisco Blake and Nuevo Leon Gov. Rodrigo Medina.

Medina said 52 people died in the fiery attack, not 53 as earlier reported by authorities. None of the deaths was by firearms, Medina said.

Nuevo Leon Civil Protection Director Jorge Camacho Rincon confirmed that the final death toll was 52, but some officials were putting the death toll at 53 because one victim was pregnant.

At least 35 of the victims were women, and at least 10 were men, officials said. Authorities have yet to determine the gender of the remaining victims.

Residents of Monterrey, Mexico's third largest city, reported a lot of confusion surrounding their efforts to determine whether their relatives were among those killed in the fire.

"Nobody really tells me anything," Alma Rosa Monsivais Estrada, 24, said of her search for her sister Maria Guadalupe.

The missing sister left for work at the casino Thursday morning, and Monsivais said goodbye to her, she said.

"For me, she is everything, my sister, my friend," Monsivais said. "She went to work out of necessity. She always goes home after work every day. It's unfair."

She had searched for her sister until midnight, visiting at least five hospitals and clinics throughout ??Monterrey without success, she said.

"I wanted to know where she is," a tearful Monsivais said.

Eventually, she decided to return to the Forensic Medical Service University Hospital, where authorities have taken most of the bodies. Officials told relatives they will install a special window to handle requests from victims' families.

"It's a nightmare, and there is misinformation," Alfredo Jimenez said angrily. He was searching for his sister-in-law Rosa Ramírez, 45, who regularly visited the casino.

His sister took Ramirez, a homemaker, to the casino a half-hour before the fiery attack occurred, he said.

Jimenez claimed some survivors provided him with an account of what happened inside the casino during the attack.

"(Customers) hid in the bathrooms because they thought there were shots, but they become asphyxiated there," Jimenez said.

A young man who said he was inside the casino explained how he and others were able to escape the burning buildling.

"One lady was able to break a window at the rear part of the place, and we got out," said the man, who didn't want to be identifed.

Meanwhile, Calderon declared three days of national mourning, and the Mexican attorney general's office offered a reward of 30 million pesos (about $2.4 million) to anyone with information that could lead to the arrest of the perpetrators.

The casino is in an upscale area of Monterrey, government and emergency officials said.

Calderon said he will increase the presence of federal forces in Monterrey and northeastern Mexico to "restore to the people of Nuevo Leon the peace that has been lost."

Though Mexican authorities have yet to identify a motive for the casino attack, Calderon said, the ambition of criminals has increased in Mexico because of the lucrative drug trade with the United States.

The president urged the country's government to reflect on "the tragedy" of Mexico and other Latino American countries affected by the "insatiable consumption of drugs involving millions of Americans."

"Mexico can no longer be the gateway nor pay the consequences that this market generates," Calderon said.

Mexico must end how the drug trafficking "generates intolerable violence, and the United States should do something to achieve" that goal, Calderon said.

As authorities investigate who is responsible for the casino attack, Calderon called on the Mexican states to accelerate the implementation of the National Agreement on Security, Justice and Legality, which seeks to reform law agencies.

"The advance of criminals is due to the corruption of institutions of security and justice," Calderon said.

"Federal forces detain criminals. Let us do our work. Leave aside the political pettiness and interests that seek to curb the actions of federal forces for political gain," Calderon said, referring to the proposed National Security Act, which the Mexican congress has yet to approve.

Civil rights groups and opposition parties have rejected the proposed law because they say it promotes the militarization of the state.

Eight others were injured in the Thursday afternoon attack, the Red Cross said.

Witnesses have told investigators that up to six people entered the Casino Royale and asked for the manager, according Adrian de la Garza, the state attorney general for Nuevo Leon.

When the manager refused, they set the building on fire, he said.

It's believed a solvent was used to start the blaze, possibly gasoline, de la Garza said.

Earlier reports that a grenade attack caused the fire could not be verified, he said. An investigation is under way.

Between 20 and 30 people were trapped in the casino by debris, said Cmdr. Angel Flores of the Green Cross.

Video from the scene showed a burned-out building as firefighters made rescue attempts to break the wall of the facade of the casino to release the smoke inside the building.

Authorities suspended rescue efforts Thursday night for fear that the building could collapse.

"With deep consternation, I express my solidarity with Nuevo Leon and the victims of this abhorrent act of terror and barbarism," he said. "These reprehensible acts require us all to persevere in the fight against gangs of unscrupulous criminals. All the support to NL."

The National Commission on Human Rights in Mexico said it has opened an investigation regarding the response to the events at the casino.

"The priority is to help safeguard the human rights enshrined in the Constitution of the United Mexican States and international treaties," it said in a news release.

The agency said it has also sent personnel to the scene, including physicians, psychologists and lawyers, to work with authorities.

Nuevo Leon, in northeastern Mexico, has been the scene of recent violence.

In July, gunmen entered a downtown bar in Monterrey and shot 20 people dead. A public safety spokesman said the attack was probably sparked by a dispute between organized crime groups for control of the El Sabino Gordo nightclub, where drugs were allegedly sold.

Nuevo Leon and the neighboring states of Coahuila and Tamaulipas have been the scene of clashes between organized crime groups. The Gulf Cartel and Los Zetas are vying for control of trafficking routes into the United States.

In November, the federal government launched the Coordinated Operation Northeast, which involves sending more security forces to the area to tackle crime.