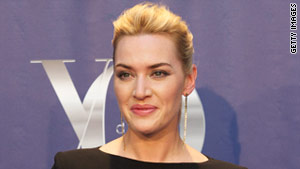 Actress Kate Winslet and her family were among those in Richard Branson's home when lightning set it ablaze.
STORY HIGHLIGHTS

(CNN) -- Family members and friends of billionaire Richard Branson, including actress Kate Winslet, were taking stock of their blessings after their narrow escape from the business magnate's burning Caribbean island home, which had been ignited by a lightning strike.

"I'm just so glad that everyone is safe. And this very easily could not have been the case," Winslet said in a news release Wednesday, two days after fire destroyed the house on Necker Island, the 74-acre private island the Virgin Group chairman owns in the British Virgin Islands.

Said Winslet: "I will never forget Richard placing his arms around both my children as we were watching the flames, and saying, 'At the end of the day, what you realize is that all that matters is the people that you love. Everything else is just stuff. And none of that stuff matters.'"

Winslet was one of about 20 people who were in the house when lightning -- from a storm spawned as Hurricane Irene was passing through the Caribbean -- struck the house at around 4 a.m. and set the house ablaze, Branson said in a statement after the incident.

Branson's daughter, Holly, was quoted as saying she awoke that morning to shouting, "which was hard to hear over the howling hurricane winds and rain, but I knew instantly something was wrong. I went downstairs to be met by my older cousins, Ned and Jack, who were shouting for everyone to get out. I looked down the corridor to see a raging fire in the main room.

"The flames were quickly spreading to where everyone was sleeping, and we knew instantly the urgency to get everyone to safety," Holly Branson said. "Once we knew everyone was out of the house, I ran into the office to call the manager to let him know what was happening. As us Bransons are renowned for practical jokes, he didn't believe me at first."

She said she "ran as fast as I could barefoot in the winds and rain to get to my mum and dad to let them know we were OK; I hated the thought of them worrying."

Branson's son, Sam, said that all he could see when he woke up "was a huge ball of flames and a giant orange glow reflecting off the rain."

"I thought everyone inside was being burned alive," he said. "I couldn't believe my eyes. I ran barefoot over cacti, through the hurricane-force winds, all I could think was I've got to try and save what was left of my family, and did my best not to break down."

He said he found out they were safe, "but the feeling of shock remained."

Richard Branson, who said he plans to rebuild the house, spoke of an encouraging encounter on Wednesday:

"The day after the fire, Kate, myself and my children Holly and Sam went up to the ruins of what was the Great House," he said. "To our absolute delight walking across the ashes was Necker's pet tortoise, ET. ... None of us could understand how anything could have survived that inferno, and ET will have pride of place in the new Great House once it's built."

The island had been featured on such TV programs as "MTV Cribs," and TV personalities Nick Lachey and Vanessa Minnillo were recently married on the island.