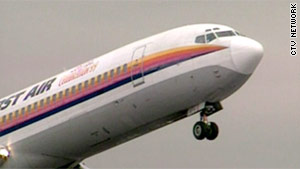 The First Air charter flight was en route to Resolute Bay from Yellowknife when it crashed.
STORY HIGHLIGHTS

The Boeing 737-200, en route to Resolute Bay from Yellowknife, went down roughly 10 minutes after its last reported communication, according to First Air, an airline based in Kanata, Ontario. Eleven passengers and four crew members were on board.

The three survivors are being transported to the Qikiqtani General Hospital in Iqaluit for treatment, according to the Royal Canadian Mounted Police. One of the adults was reported to be in critical condition.

Authorities have located two black boxes at the crash site, which was described as "widespread," police said.

The cause of the crash near the Resolute Bay airport was not immediately known.

Firefighters, medical teams, police and members of the Canadian military were among the first to respond to the accident, according to Dominique Verdon, a spokeswoman with the Canada Department of National Defence.

The Transportation Safety Board of Canada will investigate the crash, she said.