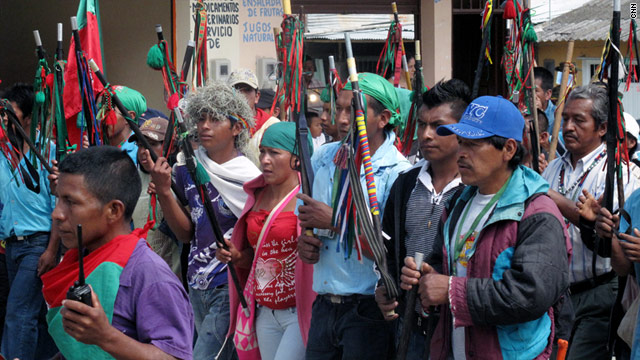 Colombian guards travel to Toribio for a meeting of the Regional Indigenous Council of Cauca to discuss FARC threats.
STORY HIGHLIGHTS
RELATED TOPICS

Cauca, Colombia (CNN) -- The call came in the morning of July 30 to the offices of the Association of Indigenous Councils of Northern Cauca, a local organization in the province of the same name in southern Colombia. A woman asked for group's boss and, at being asked to identify herself, threatened the person who answered the phone.

"You have 24 hours to vacate all your offices, or you will face the consequences," the caller said before abruptly hanging up.

The call is just one example of how civilians in Colombia remain caught in the middle in the war between rebels and government forces. Despite a series of high-profile victories for the government, in the areas where the guerrillas operate, such as Cauca, it is still very much a battlefield.

Locals believe that the Revolutionary Armed Forces of Colombia, or FARC, was behind the threat to Association of Indigenous Councils of Northern Cauca.

Ten days before the call, groups under the umbrella of the Regional Indigenous Council of Cauca, or CRIC, coordinated a meeting of leaders from across the province. Fed up with civilian bloodshed and the effects the conflict is having on their communities, the leaders demanded that all armed groups leave their territories. They also asked the government to enter into a peace dialogue with FARC.

FARC is a leftist rebel army that claims to work as a bulwark against Colombia's elite ruling class and has traditionally funded its operations through narcotics sales and kidnappings. It has been at war with the Colombian government since the 1960s.

"We hope both sides understand that our objective is humanitarian in essence. We are calling on our friends to help the government and the FARC understand this," CRIC said in a statement after the threat. "We don't want to give either side a military advantage; what we want is to defend the lives and the autonomy of our communities."

Despite the organization's stated intentions to bring peace, the armed groups in the area appear to have different ideas. Anonymous death threats are not to be taken lightly in Colombia. Over the past 10 years, numerous trade union activists, human rights defenders and indigenous leaders have received similar calls, only to be killed weeks later.

FARC has a history of targeting indigenous leaders who stand up to them and claim autonomy. However, as the indigenous communities are seen as a threat from all sides, no one is sure who made the threat.

Although the Colombian military based in Cauca generally believes that most of the indigenous Nasa people are on FARC's side, local leaders say the guerrillas regularly target them.

FARC has lost much control over the past decade years, with its ranks shrinking about 18,000 to below 6,000, but attacks in recent years are on the rise. Colombian think tank Nuevo Arco Iris reported a 10% increase in attacks over last year. Though some media have labeled it a comeback, observers believe it is more of a desperate attempt to hold on to strategic land.

As the government increases its operations in Cauca and FARC becomes increasingly violent, indigenous leaders say the attacks are being carried out with no regard for the civilian population.

Gabriel Pavin, former mayor of Toribio, the small town where the CRIC meeting was held, said FARC has been targeting the indigenous population more and more every year.

"The situation is getting worse," he said. "First, it started in the towns; now, it has reached all of the rural areas, too. Now, they do not care about the natives. They attack us at in the daylight during market day."

Pavin was referring to an attack by FARC on the local police station last month. The powerful explosion destroyed nearly 30 homes and damaged nearly 500 but left the police station -- a concrete fortress -- intact. Three civilians were killed in the blast and nearly 200 injured. One of those killed was two blocks away, selling meat in the market.

"If they care about the people, why they attack like this? The police station is fine but civilian life destroyed," Pavin said.

As a result of the increasing violence, countless indigenous people have left to find jobs in safer places. According to the Internal Displacement Monitoring Center, more than 5 million Colombians have had to flee because of the violence.

Maria Mesoir, 42, said her family felt so endangered that they came to Bogota, where she now works as a cleaner.

"I miss my home, but we always felt targeted, despite having no involvement in the conflict. Also, my young sons were in danger by being near the FARC," she said.

Local social workers also said that the number of children being taken to become FARC child soldiers is growing.

"They need more soldiers, so they manipulate young native children to go and train with them. Then, the government thinks we support FARC, but we don't. It is a problem for our communities, too," said a Nasa activist who declined to give her name for her security.

As the government sends in an extra 500 specially trained troops to hunt down the FARC chief, known as Alfonso Cano, the possibility of additional FARC pressure on the indigenous communities continues.

As the communities become united against FARC at a desperate time, more death threats can be expected, observers say.

Jose Miller Correa, governor of the indigenous council of Tacueyo, says the community has chosen its position.

Together with the Indigenous Guards, an unarmed police force, they will unify the community and push both FARC and the military out of their territory.

"It is too late to worry what they think. We became an enemy of the FARC and government military along time ago," Correa said.