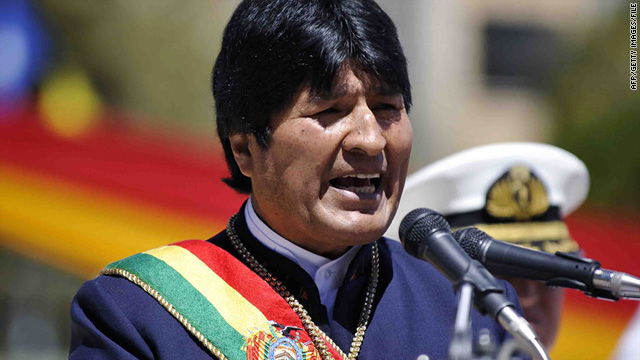 (CNN) -- Bolivia's president told CNN en Español Wednesday that he remains afraid that the United States government is plotting against him.

"The United States, as a global power, has all the experience of creating setups," President Evo Morales said.

Over the weekend, Morales said he was worried U.S. authorities would plant something on his presidential plane while he attended the U.N. General Assembly meeting in New York.

"They are preparing something to discredit us with drug trafficking," he told a convention of female farm workers in Bolivia Sunday.

Morales stood by those comments when he spoke with CNN en Español from New York City after attending Wednesday's U.N. meeting.

He said agents from the Drug Enforcement Administration had pursued him when he was a union leader, and that U.S. authorities still want to link him with drug trafficking and discredit his government.

"When presidents do not submit to the United States government, to its policies, there are coups," he said.

The U.S. Embassy in La Paz declined to comment on Morales' assertions, and a U.S. State Department spokesman could not be immediately reached for comment.

Morales said Wednesday that he did not regret his decision to expel the U.S. ambassador for allegedly conspiring against his government.

The U.S. government rejected that accusation as "baseless," according to a statement about Bolivia on the U.S. State Department's website.

"(The U.S. ambassador) had meetings with the opposition," Morales said Wednesday, and noted that U.S. officials in Bolivia had tried to stop his government from forming alliances or agreements with Cuba, Iran and Venezuela.

He referred to Venezuelan President Hugo Chavez as his "anti-imperialist, anti-capitalist, revolutionary brother."

Morales said Chavez, who has been undergoing cancer treatment, sounded strong when the two leaders spoke over the phone Tuesday.

"I would say that he has already recuperated, listening to his voice. It left me very happy," Morales said.

Morales is scheduled to head to Peru Thursday for the inauguration of Peruvian President-Elect Ollanta Humala.