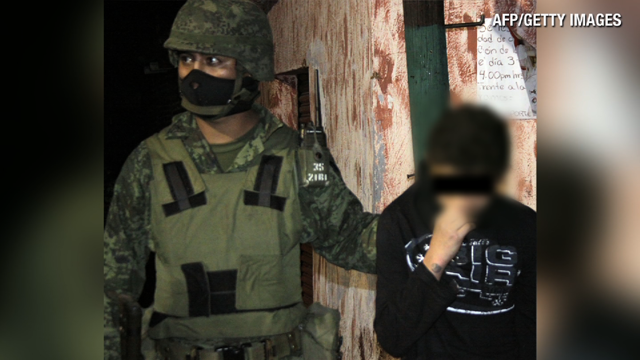 (CNN) -- A 14-year-old American citizen has been found guilty in a Mexican court of torturing and beheading at least four people and kidnapping three others.

Judge Jose Luis Jaimes sentenced the teenager, known as "El Ponchis" ("The Cloak") to three years in a correctional facility -- the maximum sentence allowed under Mexican law because of his age. The teen also must pay a 4.5 million-peso fine (about $400,000).

Mexican authorities also said the 14-year-old was responsible for at least three kidnappings as an operative for the South Pacific Cartel.

The teenager's age -- and his on-camera description of the slayings -- brought international attention to the case. Analysts said the dramatic example showed how Mexican drug gangs were increasingly recruiting youths.

Neither the public nor the media had access to the trial because of the defendant's age. Only the judge, attorneys, family members and a human rights observer were inside the courtroom.

Prosecutors called 43 witnesses to the stand during six days of testimony that ended Monday, prosecutor Jose Manuel Serrano Salmero said. There were no witnesses for the defense, juvenile court spokesman Irvin Vergara said.

Family members were present, but Vergara wouldn't specify who was at the trial held in Miacatlan, near the central Mexican city of Cuernavaca.

According to Vergara, the defendant showed good behavior during the proceedings that normally began at 9 a.m. and lasted until the early evening.

"He was calm, relaxed, and serious. There were no interruptions or disturbances during the trial," he said.

"How many have you killed?" one reporter asks.

"Four," responds the accused, who seems calm and collected in a video of the interview.

"How did you execute them?" the questioner continues.

"I slit their throats," the teen replies.

Authorities recorded the video only hours after they arrested the teenager near Mexico City last December as he was allegedly trying to catch a flight to Tijuana to flee to the United States.

A YouTube video that circulated last year purportedly showed the teenager beating a man with a two-by-four while the man was tied at the wrists and hanging from the ceiling, as other young people watched.