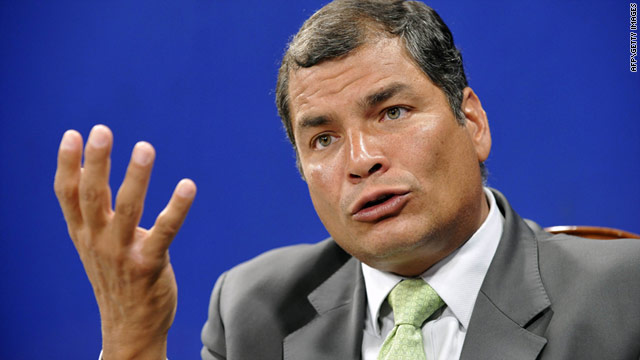 Ecuador's President Rafael Correa speaking to the press following the results of his judicial reform referendum on May 7.
STORY HIGHLIGHTS
RELATED TOPICS

Quito, Ecuador (CNN) -- A judge in Ecuador ruled Wednesday that the directors and former opinion editor of El Universo newspaper must each serve three years in prison for an opinion article about President Rafael Correa, state media reported.

The judge also ruled that the accused must pay $30 million, and the newspaper must pay $10 million, to Correa, the state-run El Ciudadano government information website reported.

The case drew international attention from press-freedom advocates, who say Correa aims to crack down on critics by restricting the media.

Correa filed a libel lawsuit after El Universo published a column in February by the newspaper's then-opinion editor, titled, "No to lies."

Correa argued that the article, which referred to him as a dictator, unjustly claimed he had ordered security forces to open fire at a hospital full of civilians last September.

Correa said Tuesday that the article's assertions were untrue, baseless and "an outrage," according to the state-run El Ciudadano government information website. The president told reporters that he hoped the case would set a precedent.

A headline on El Ciudadano's website Wednesday said the ruling was a "symbol of the fight for true freedom of expression."

"We have defended the right to honor, the right to dignity and any person who has felt offended or humiliated by the publication of false information," Vera said, according to El Ciudadano.

But the column's author told CNN en Español in an exclusive interview Wednesday that Correa and others had misinterpreted his meaning.

Emilio Palacio, El Universo's former opinion editor, said he was not accusing the president of ordering an attack on innocent civilians, but instead saying that a future president who is an enemy of Correa could make such an accusation.

Palacio said he planned to appeal the judge's ruling, arguing that he was not given an opportunity to present evidence in court.

"We are living in a country where one cannot say what is going on without facing the penalty of going to prison," he said.

Palacio resigned from his post at El Universo last week, saying he was innocent but wanted the lawsuit to end. On Wednesday, he said Correa was trying to break him and his former colleagues.

"For what? To fill his pockets and impose a totalitarian regime. This is what the dictator Rafael Correa is trying to do," he said.

In a statement posted on its website, El Universo decried the ruling as "a violation against the universal principle of freedom of expression" and vowed to appeal.

"El Universo newspapers rejects this 80-page sentence, delivered in record time (less than 24 hours), by a judge said that he had worked until 5 a.m. to absorb details of the case, which has moved quickly through the hands of five distinct judges in four months," the statement said.

Pedro Valverde, an attorney representing El Universo, told CNN en Español Tuesday that the newspaper was not given an opportunity to fully present its side. He argued that the publication's policies indicate that its directors have no influence on the content of its columns.

On Tuesday, the newspaper's directors offered to print a correction, but Correa said it was too late.

"The moment of gentlemen, of people who have ethics, has already passed," he told reporters.

Press-freedom advocates have criticized the case and other recent efforts to regulate media in Ecuador.

In a statement Tuesday, the Inter American Press Association criticized "the ongoing harassment of the Ecuador's independent press through excessive and disproportionate legal suits by President Rafael Correa."

The Committee to Protect Journalists also weighed in on the libel lawsuit shortly after Correa filed it.

Palacio pledged Wednesday to keep writing, but urged others to take action.

"The independent press fought as far as it could. Now it is the citizens' turn, united, mobilizing in the streets," he wrote in a post on his Twitter account.