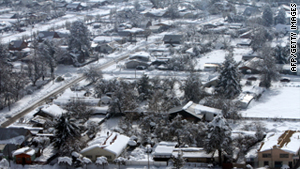 Some 16,000 residents of rural areas in Araucania remain isolated due to heavy snowfall, authorities report.

"It has snowed more than ever," Curacautin Mayor Jorge Saquel told CNN Chile Tuesday. "This is an anomaly. ... This worries us because the meteorologists assure us that new snowstorms are coming."

In the city of Lonquimay, officials said snow had piled more than 2.3 meters (7.5 feet) high.

Interior Minister Rodrigo Hinzpeter on Wednesday called the situation a "white earthquake" and asked the country's military and public works officials to help citizens in some of the hardest-hit areas in the country's central Araucania region.

"This storm is strong and it is likely that in the coming days we could suffer from more bad weather fronts, more heavy snowfall, that make the situation even worse," Hinzpeter said. "But of course when this occurs, our government will always be on the side of those who are suffering, using all the tools provided by our legal system."

Authorities said they were sending trucks filled with food to the region, along with military helicopters to reach people in remote areas.

"The settlers and people of Lonquimay are buried undered the snow. There are areas with more than 2.3 meters of snow and we have gone many days without being able to communicate with many of them," Lonquimay Mayor Guillermo Vasquez said in a statement Monday.

"The emergency director promised us two bulldozers to clear the roads. We have people who are isolated. ... Touching the snow, it is like glass," Saquel told CNN Chile. "The machines and food should have arrived as soon as possible."