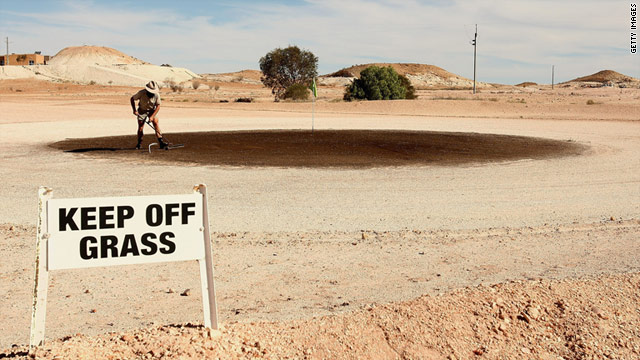 The 18-hole, par 72 course is a far cry from Royal St. George's, the site of the British Open this past weekend. But it still has its charms. Golfers carry a piece of artificial grass with them as they hit their ball to "greens" made of oil-soaked sand.

The town of Coober Pedy is in South Australia, about 850 km (528 miles) north of Adelaide. It is known as the "opal capital of the world" for its vast collection of opal fields. According to its website, the name Coober Pedy is derived from the Aboriginal words "kupa piti," which is commonly assumed to mean "white man in a hole."

Congrats to "Techbuster" and "PeteMD" for being the first to correctly guess Coober Pedy in our photo challenge!