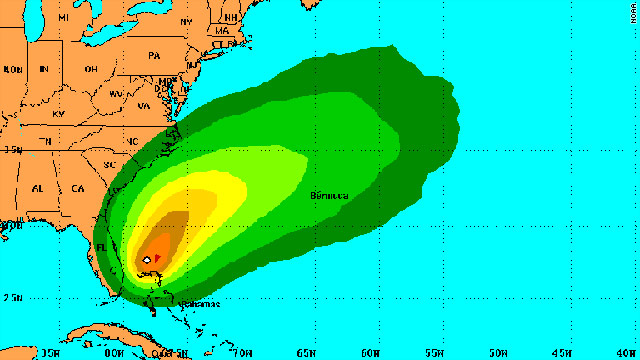 Tropical Storm Bret could produce 1-3 inches of rain and high surf conditions along some beaches in the Bahamas.
STORY HIGHLIGHTS
RELATED TOPICS

(CNN) -- Bret has become the second tropical storm of the 2011 Atlantic hurricane season, according to the National Weather Service.

As of Sunday night, Bret was about 100 miles (165 kilometers) northwest of Great Abaco Island in the Bahamas, packing maximum sustained winds of 40 mph (65 kph) with higher gusts. These winds could be felt up to 35 miles (55 kilometers) from the center of the storm.

Not much movement was expected overnight, but the National Weather Service said it expected a slow north-northeastward motion to begin on Monday.

Additional strengthening is expected in the next 48 hours, according to the agency.

A tropical storm watch is in effect for Grand Bahama Island and the Abaco Islands in the northwest Bahamas. Bret could produce 1-3 inches of rainfall and high surf conditions along northern- and western-facing beaches.