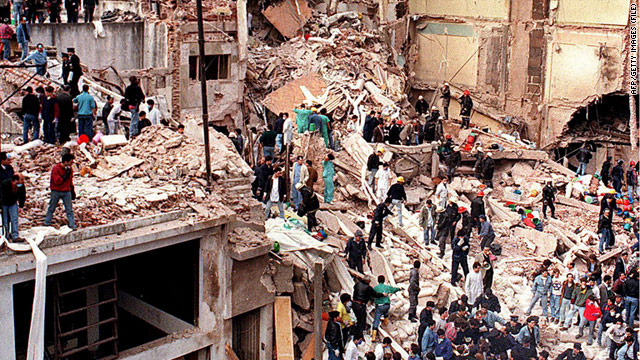 (CNN) -- Iran has offered to "collaborate" with Argentina's investigation into the worst terrorist attack in the South American nation's history, the bombing of a Jewish community center that killed 85 people in 1994.

The offer from Iran's Foreign Ministry was reported by the country's official news agency IRNA two days before Argentina marks the 17th anniversary of the attack Monday.

Despite media accounts of the offer, Argentina's foreign ministry said Sunday it had not received official word from Iranian officials.

"Nonetheless, if what has been published were to be confirmed, it would mean an unprecedented and very positive advance by the authorities of the Islamic Republic of Iran," the ministry said in a statement.

Argentina's top prosecutor Alberto Nisman has blamed Iran for the attack, which also injured about 300 people.

But Iran's foreign ministry Saturday accused Argentinian officials of "deviating" from the facts in order to "allow the real perpetrators to escape from justice," and said Iran will soon disclose evidence they hope will "shed light" on the case.

Argentina requested the arrest of six people in 2007 in connection with the bombings, including the then-defense minister of Iran, Ahmad Vahidi; former Iranian President Ali Akbar Hashemi Rafsanjani; and Mohsen Rezaie, who was head of Iran's Revolutionary Guard at the time of the attack.

Interpol approved so-called Red Notices for the six, alerting countries around the world of Buenos Aires' desire to have them arrested.

Argentinian authorities have accused Vahidi of planning the July 18, 1994, blast at the Israeli-Argentinian Mutual Association, known by its Spanish acronym AMIA.

Vahidi is accused of working with Lebanon's Hezbollah militants.

"At 9:53 a.m., a car bomb, a Renault traffic van driven by Ibrahim Hussein Berro, a Lebanese Hezbollah militant, struck against the AMIA building," prosecutor Nisman said in a documentary about the attack, "Memoria."

"After two years of hard work, we could prove that the attack had been organized, planned and funded by the highest authorities of the Islamic Republic of Iran," he said.

"Not all victims were Jewish," Nisman said. "However, there was one common denominator ... all of them were innocent, and none of them had to die in such a lethal terrorist attack."

"Memoria," sponsored by the World Jewish Congress and the Latin American Jewish Association, shows the chaos that ensued in the aftermath of the attack as rescuers tried to save women, men and children trapped in the debris.

Sirens are scheduled to sound on Monday morning at 9:53 in honor of the victims, Argentina's official Telam news agency reported.

President Cristina Fernandez de Kirchner and Israeli and Argentinian government officials are scheduled to attend a wreath-laying ceremony alongside relatives of victims, the AMIA said on its website.

In a campaign that loosely translates as a "Strike Against Forgetting," Argentina's Jewish community leaders say they are fighting against what they see as the mishandling, cover-ups and eventual shelving of the judicial investigation that remains unresolved after 17 years.

"Because we have memory, we demand justice," they said on the AMIA website, calling the bombings "the most horrendous anti-Jewish act since World War II."

Critics claim the investigation has been marred by judicial ineptitudes and corruption.

Leading federal judge Juan Jose Galeano was impeached and removed from handling the case in 2005, replaced by prosecutors Alberto Nisman and Marcelo Burgos, who issued an indictment against Iran and Hezbollah for masterminding the attack.

Nisman ordered the reopening of the case against a man named Carlos Telledin, who was imprisoned for nearly a decade accused of owning the truck packed with explosives, Telam reported.