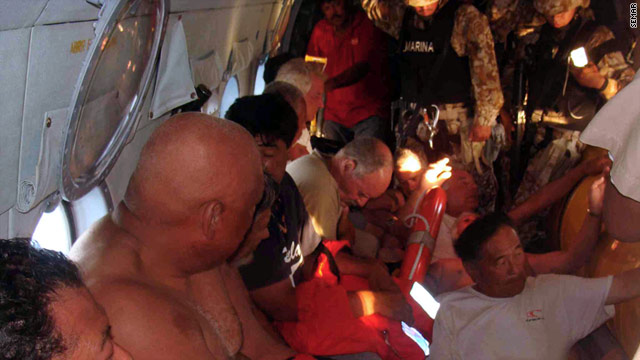 (CNN) -- U.S. and Mexican authorities were scouring the seas Monday for at least five people -- and possibly as many as eight -- missing more than a day after a tourist boat carrying more than 40 people capsized off the east coast of Mexico's Baja California peninsula.

But Dora Winkler, a spokeswoman for the captain of the Port of San Felipe, said seven people were missing.

There were also conflicting numbers on how many people were on the boat when it sank. Mexican authorities counted 43 passengers and crew, while the Coast Guard put the number at 44.

All 16 crew members of the Erik survived; another who had been on the list of crew members apparently failed to embark, the governor said, citing passengers' accounts.

In a subsequent news release, the Coast Guard said its helicopter had covered more than 42 miles of water by Monday afternoon, flying at an altitude of 300 feet.

The Erik sank in the Sea of Cortez, near Isla San Luis, Mexico, east of Baja, at 2:30 a.m. Sunday, the Coast Guard said.

"They ran into some bad weather, capsized, the boat sank," Dunphy said. Several people swam to shore, walked to the nearest town and alerted the Mexican navy to what had happened, he added.

But the Mexican navy said it was alerted by the cook of the boat, who was rescued by fishermen along with two passengers. He told officials that 27 tourists had been aboard the Erik when it sank approximately 60 nautical miles south of San Felipe, the navy said in a news release.

All the rescued people were in good health and were taken to their hotels, with the exception of one person with diabetes who remained under observation, the navy said.

"We have been working with Mexican navy authorities and the U.S. Coast Guard in the search and rescue," Baja Sportfishing Inc. said in an e-mail. "Right now our main concern is making sure that everyone is accounted for."

The Erik was a 115-foot fishing boat with a 24-foot beam, according to the company's website. "Built in Holland, she was equipped with stabilizers to handle the turbulent North Sea," it said.

Later Monday, the website added, "Due to events occurring at this moment, all further trips are canceled."

CNN's Helena DeMoura and Leslie Tripp contributed to this story.