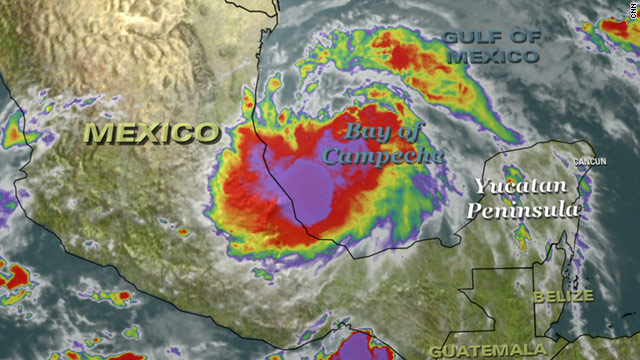 (CNN) -- Tropical Storm Arlene appeared to be losing steam as it lumbered across Mexico Thursday, but authorities said the possibility of torrential rains and flooding still threatened many parts of the country.

Arlene, the first named storm of the 2011 Atlantic hurricane season, was moving west-southwest at about 7 mph, packing sustained winds of 40 mph, the National Hurricane Center said. It was expected to diminish into a tropical depression later Thursday.

Forecasters from the center warned of possible flash floods and mudslides.

In Tamaulipas, rains began early Thursday, and precautions were being taken in the southern part of the state, which is expected to be among the hardest hit, said Adan Moctezuma, spokesman for the state government. An alert had been issued in the region, telling residents to prepare for evacuations if necessary.

Mexican authorities issued a hurricane warning as Arlene advanced, but that warning had been lifted by Thursday afternoon.

The storm is expected to produce 4 to 8 inches of rain in some areas, while isolated amounts of up to 15 inches could fall in mountainous terrain and could cause life-threatening flash floods and mud slides.