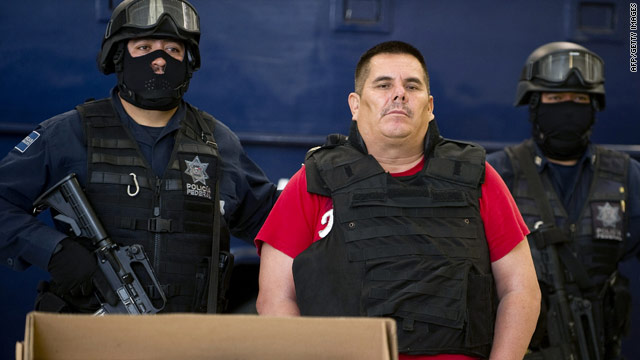 (CNN) -- If you are a Mexican cartel kingpin -- or even a second-tier player -- this is what you can expect if you are captured:

You will be transported inside an armored federal police vehicle the size of a camper to an auditorium and sit there while a high-ranking official recites for reporters a list of your alleged crimes from a prepared statement. These officials read quickly, barely taking a breath as they list the first, middle and last names of all those accomplices who went down with you. Ages, too. A pack of reporters scribble down notes on the cash, drugs and weapons you had at the time of your arrest -- usually including grenades and assault rifles.

This was the case for Jose de Jesus Mendez Vargas, the top leader of La Familia drug cartel, who was arrested Tuesday.

The doors of the armored vehicle will open, and masked federal officers will escort you to the front, where you are assaulted by camera flashes recording images of your shackled self.

Invariably, the official leading the presser will say something to the effect that your capture is a major blow to your drug trafficking organization, which has been severely weakened.

Despite many such press conferences and several high-ranking cartel leaders arrested, the drug violence in Mexico continues unabated.

So one might think that the proclamation by Mexico's national security spokesman that the arrest of Mendez, alias "El Chango" or "the Monkey," marked the end of the cartel may have been exaggerated.

But experts say Poire and the Mexican government may be right this time. The leader's capture, they say, effectively marks the end of La Familia Michoacana.

The end of La Familia would bring a close to the reign of one of Mexico's youngest, but most violent, cartels, operating in the central state of Michoacan.

"For once, I agree with the Mexican spokesman," said George Grayson, professor of government at the College of William & Mary. "It's a fatal blow to La Familia."

The federal government had been on an offensive against the cartel, but turned up the heat after May 24, when a police helicopter was attacked and forced to make an emergency landing, Rosas said. In the ensuing operation, 36 La Familia operatives were arrested within three days and four more after that.

Those rank-and-file arrests led to the capture of some of the organization's top leaders, including Mendez, he said.

"What the federal police has done has affirmed that La Familia has been destabilized," Rosas said.

By some accounts, La Familia counts as many as 4,000 members. Rosas disputed that figure Wednesday. But regardless of the number, what will happen to the now-leaderless cartel members?

"Some of the cadre and lieutenants will just return to their former lives, but those with the stomach to continue fighting (their rivals) the Zetas will be absorbed by the Sinaloa cartel," Grayson said.

The Sinaloa cartel and its leader, Joaquin "El Chapo" Guzman, will probably gain more influence in the Michoacan area.

The territory will not be uncontested. The two remaining leaders of La Familia had actually recently split from the group and formed a criminal organization they call the Knights Templar.

This new group will surface as a replacement to La Familia, though it's too early too tell how powerful it will be, said Jorge Chabat, an expert on drug trafficking at Mexico's Center for Research and Teaching in Economics.

Mendez's capture "probably is the end of La Familia, but only as we have known it until now," he said.

Authorities also announced the arrests of eight members of the Knights Templar.

Mendez, who originally worked for the Gulf cartel, co-founded La Familia in 2006.

The cartel announced itself to Mexico like this that year: "The family doesn't murder for hire, doesn't kill women, doesn't kill innocent people, only those who deserve to die. Let it be known, this is divine justice."

The message from the drug cartel was written on a piece of cardboard tossed onto the dance floor at a club in the city of Uruapan, along with five severed human heads.

Some say the cartel started out as a vigilante group. It gained notoriety for its cult-like religious bent and found a niche in methamphetamine production and marijuana cultivation.

That may be one of the reasons why the capture of the cartel's leader may be enough to topple the whole organization, whereas the same might not be true for other cartels.

For example, if El Chapo, Mexico's most-wanted man, were captured, it would not mean the end of the Sinaloa cartel, Grayson said. The Sinaloan's structure is less centralized, and he has two powerful lieutenants who would take the reins, he said.

The same applies for the powerful Zetas

If its leader, Heriberto Lazcano Lazcano, were captured or killed, as was rumored this past week, the cartel would remain intact, Grayson said. In their case, Lazcano's second-in-command is becoming powerful enough to pose a challenge to the leadership.

As for the remnants of La Familia, under the moniker of Knights Templar, their leadership is weak, Grayson said.

"I don't see anyone who can reconstitute La Familia," he said.