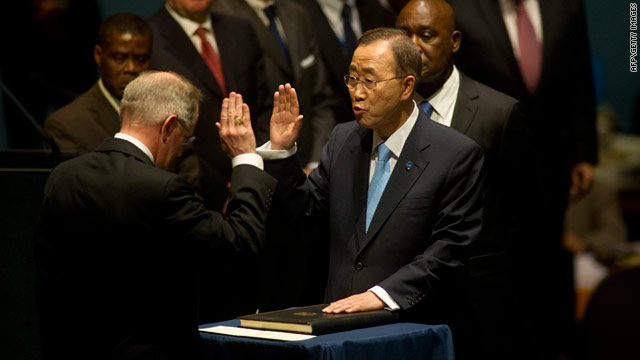 Ban Ki-moon takes his oath of office for his appointment as the Secretary-General of the U.N. on Tuesday in New York.
STORY HIGHLIGHTS
RELATED TOPICS

United Nations (CNN) -- The U.N. General Assembly on Tuesday formally approved the nomination of Secretary-General Ban Ki-moon to a second term as the head of the world body.

The veteran South Korean diplomat was confirmed to a new five-year term by acclamation Tuesday afternoon, four days after the Security Council approved his nomination.

His supporters argued that Ban has put the United Nations out in front on issues like the recent unrest in the Middle East and climate change. Detractors say he is not a great communicator or negotiator and travels too much outside New York, but he was unchallenged for a second term.