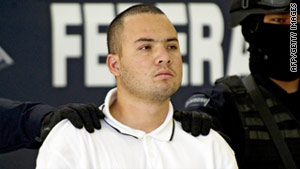 Edgar Huerta, 22, has told officials he was responsible for the abduction of more than 70 undocumented immigrants.
STORY HIGHLIGHTS
RELATED TOPICS

Edgar Huerta, 22, was arrested with his girlfriend Thursday in the central northern state of Zacatecas.

Huerta told authorities he was responsible for the August abductions of more than 70 undocumented immigrants, later found dead in the northern border state of Tamaulipas, authorities said after his arrest. He also reportedly told officials that he had killed 10 people.

Violence is common in Tamaulipas, where authorities are battling rival drug cartels. The Gulf cartel and the Zetas cartel used to work together, but split more than a year ago and are now fighting for control of lucrative smuggling routes into the United States.

Huerta is accused of running with the Zetas and reportedly told authorities that he had directed the kidnappings of passengers on at least six buses near San Fernando, a town in Tamaulipas. The passengers were then allegedly taken to area safe houses and tortured to see whether they belonged to the rival Gulf cartel.

The growing reach of the cartels has increased the risk for migrants crossing through Mexico to get to the United States, Mexico's National Commission for Human Rights has said. An investigation by the commission showed that 9,758 migrants were abducted from September 2008 to February 2009, or about 1,600 per month.

The bodies of 72 migrants from Central and South America were discovered at a ranch near San Fernando in August. In the same area, authorities found mass graves this year, containing the remains of nearly 200 people. They began finding the graves while investigating the kidnapping of passengers from a bus in late March.

The Zetas have been blamed for the mass graves and for the deaths of the 72 migrants found last year.

Nationwide, there have been some 35,000 drug-related deaths since President Felipe Calderon began a crackdown on the cartels in December 2006, the Mexican government says.