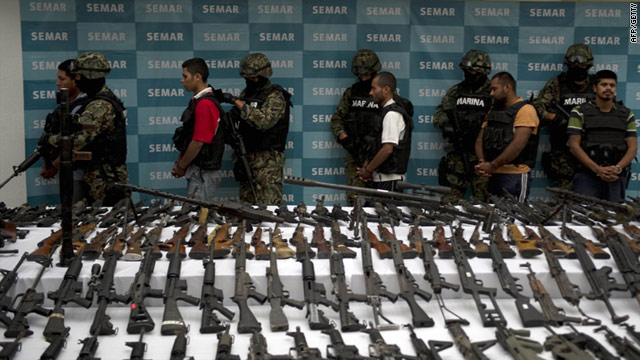 (CNN) -- The top prosecutors in Mexico and Guatemala set their sights on the Zetas drug cartel Wednesday, pledging to pool information and resources as their countries battle the notoriously violent criminal group.

Attorneys general from the neighboring nations agreed "to create concrete mechanisms for quickly exchanging timely information for the fight against the Zetas organization and others," Mexico's Attorney General's Office said in a statement.

The top prosecutors met a day after Guatemalan authorities announced a monthlong extension of the "state of siege" in the northern border province of Peten -- a move aimed at continuing a crackdown on organized crime in the area.

Guatemalan President Alvaro Colom declared the emergency measure in May after investigators found the bodies of 27 dismembered and decapitated workers on a farm in Peten.

According to a report from Guatemala's interior ministry, the suspected attackers were searching for the farm's owner. "I will find you and I will leave you like this," a message written in blood on a white wall said. It was signed "Z 200," the name of a Zetas cell in Guatemala, the report says.

The state of siege curtails citizen liberties and allows the military to order anyone suspected of conspiring against the government to be arrested and imprisoned without a warrant.

Authorities extended the measure because they need more time to improve security and strengthen institutions in the province, Guatemalan Interior Minister Carlos Menocal said in a statement Tuesday.

The Zetas originated in Mexico as the armed branch of the Gulf Cartel, and have split off into a separate drug-trafficking organization with an international reach.

The U.S. Drug Enforcement Administration describes the Zetas as "a group of Mexican military deserters ... who have kidnapped, tortured and murdered -- including beheadings of law enforcement officials, innocent citizens, informants and rival drug gangs."

In an interview with CNN en Español last year, Menocal noted that clashes between authorities and the Zetas had significantly increased. He said his country needed more help from the United States to combat cartels that are increasingly carving out new drug transport paths.

Guatemala is scheduled to host a conference on Central American security next week.

So far this year, Guatemalan authorities have seized 344 million quetzales (about $44 million) worth of cocaine, 566 vehicles, eight airplanes and about 200 weapons from suspected members of criminal organizations, Colom said Tuesday, according to the state-run Guatemalan News Agency.

"All of the region is making important security efforts, but there are other countries that are not doing their part," he said at forum of regional leaders in Guatemala City Tuesday. "We cannot keep paying with deaths."