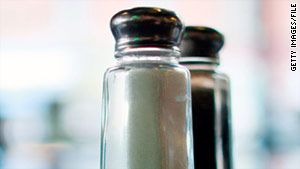 Nearly a quarter of the population in Buenos Aires, Argentina, is affected by hypertension.
STORY HIGHLIGHTS
RELATED TOPICS

In an effort to combat hypertension, which affects some 3.7 million residents in the province -- nearly a quarter of the population, the health department reached an agreement with the hotel and restaurant federation to remove salt shakers from the tables at their eateries.

"On average, each Argentinian consumes 13 grams of salt daily, while according to the World Health Organization, you should consume less than five," Health Minister Alejandro Collia said when he announced the change last month.

The measure is not as extreme as it sounds. Salt will be available by request, but only after the patrons have tasted their food.

The government also signed an agreement with the local breadmakers federation to reduce by 40% the amount of sodium in bread sold in the province.

"To reduce consumption (of salt), we will recommend to the breadmakers to reduce to 750 grams of salt per bag of 50 kilograms of flour, that is, 100 less grams that what is normally added," said Ruben Salvio, head of the breadmakers federation.

Collia said that if Buenos Aires residents can reduce their daily salt intake by three grams, it could save about 2,000 lives a year.

Hypertension, commonly known as high blood pressure, has been linked to high salt and sodium consumption, but there is still debate on the issue.

A study by European researchers released just weeks before the new Buenos Aires salt restrictions discounted the link between salt and hypertension.

"The chef or cook already in preparing (a meal) puts salt on it, and the client without tasting it adds more salt on top," said restuarant owner Hector Toublanc.

Guests were divided on the new measure.

"For me, this is perfect," said retiree Angelica Slom. "In reality I would not miss (a salt shaker) if it was not on the table."

Businessman Hugo Verlandi had a problem with the restrictions.

"I am against prohibitions," he said. "I think that we have to educate people so that they know what to do, not prohibit it, but put it as an option."