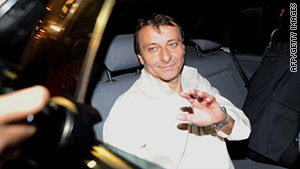 Cesare Battisti, an Italian leftist wanted for multiple killings in Italy in the 1970s, is freed from a prison in Brazil, on Thursday.
STORY HIGHLIGHTS

(CNN) -- Diplomatic tension between Brazil and Italy heightened Thursday after Brazil's Supreme Tribunal freed a fugitive wanted for multiple killings in Italy in the 1970s.

The high court's decision appeared to put an end to years of wrangling over the fate of Cesare Battisti, who was condemned to life in prison in Italy for four murders he denies committing while a member of an extremist left-wing group.

Italy's foreign ministry responded to the Wednesday night ruling with a promise to take the issue to the International Court of Justice in The Hague, Netherlands.

"I cannot but comment that today's ruling by Brazil's highest judicial body, apart from offending the right to justice of the victims of Battisti's crimes, appears to run contrary to the obligations stated in the international accords that bind our two countries, which, moreover, have age-old ties of friendship and shared blood," Italian Foreign Minister Franco Frattini said.

The Brazilian judges found, by a vote of 6-3, that former President Luiz Inacio Lula da Silva's decision to deny Battisti's extradition was "an act of national sovereignty" that the high court could not reverse.

Battisti was a member of the Armed Proletarians for Communism, or PAC, guerrilla group in Italy.

He is alleged to have participated in a number of crimes, which led to his incarceration. He escaped from an Italian prison in 1981 and was granted asylum in France during the presidency of Francois Mitterrand. The so-called Mitterrand Doctrine gave asylum to all Italian militants who renounced the armed struggle.

In 1998, Battisti was tried and convicted in absentia of the four killings.

For several years, France and Italy were embroiled in diplomatic spats over extradition requests.

Battisti later fled to Mexico, where he continued his work as a writer of thriller novels, and subsequently to Brazil.

In Brazil, his fate was oftentimes unclear.

"Italy may not like it, but will have to respect it," Lula said at the time. "This person is being accused of a crime which took place in 1978, and his accuser no longer exists to prove the veracity of the facts."

Lula sided with the Italian's claims that the conviction against him was politically motivated, and in the last days of his administration rejected the extradition. Italy protested.

"What is at stake here is an act of sovereignty of the president," Judge Luiz Fux said. "The Italian government has litigated against the Federal Republic of Brazil."

The point the majority made was that they were not ruling on the Battisti's culpability in the crimes, but whether the court had the power to overrule Lula.

Another judge, Ricardo Lewandowski, said that when he studied the original request for extradition, he was convinced that Battisti had indeed committed the crimes.

"But right now, this is not the issue at stake," he said. "I understand that the president made a political act, an act of government, which is characterized by broader discretion."

"The decision does take into account the legitimate expectations of the justice of the Italian people and especially of the family of Battisti's victims," his office said in a statement.

Armed Proletarians for Communism was one of Italy's home-grown left-wing armed groups of the 1970s. Like the infamous Red Brigades, they committed politically motivated murders on behalf of what they saw as working-class ideals.