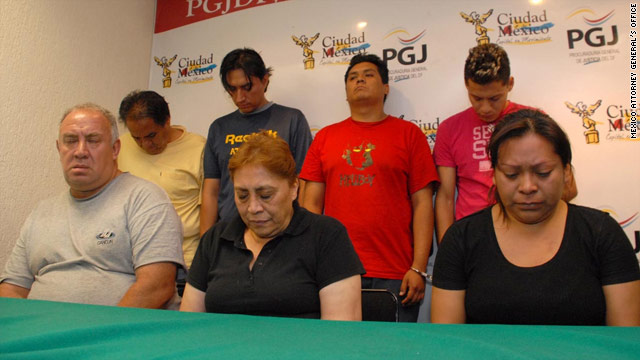 Mexico City (CNN) -- While an estimated 10,000 women are victims of human trafficking in Mexico's capital, there were only 40 investigations of the crime and three convictions in the city last year, according to a report issued this week.

The discrepancy is an "alarming figure" that shows a need to improve laws and policies, according to a study on human trafficking and sexual exploitation from Mexico City's human rights commission, which calls the phenomenon a "new form of slavery."

"The authorities are not investigating, nor are they asking witnesses," said Eva Reyes, investigation coordinator at the Antonio de Montesinos Center for Social and Cultural Studies, one of the partners of the study.

Cultural norms and social stigma prevent people from realizing that many prostitutes lingering in dark alleys of Mexico City are victims, officials said as they presented the report Wednesday.

"They are seen as people who are doing it freely. That is the first obstacle to justice," Reyes said.

Authorities in Mexico City announced Monday that they had rescued 62 victims of a forced-prostitution ring -- including a 13-year-old girl.

Five men and two women who police say ran the ring were arrested after an investigation that started when a minor involved reported the suspects to authorities.

One victim told investigators that she was forced into prostitution in Mexico City after meeting two men in Oaxaca, a city more than 460 kilometers (288 miles) away.

"After chatting with her, the victim told him that she was a domestic worker and the accused offered her a more comfortable life with well-paid work, and in a second encounter he convinced her to come live with him," the statement said.

Such approaches are a common tactic for those involved in human trafficking, who frequently target women and girls in smaller cities outside the capital, Reyes said.

In the southern border state of Chiapas, Central American women are frequently a target, Reyes said.

But regardless of where victims are recruited, she said, they often pass through -- or end up -- in Mexico City, a sprawling metropolis of more than 21 million people.

"In one case, 107 trafficking victims, both Mexican and foreign citizens, were freed from a factory disguised as a drug rehabilitation center in Mexico City; many of them had been kidnapped, and all were subjected to forced labor," according to 2010 report on human trafficking from the U.S. State Department.

But more needs to be done, this week's human rights commission report said.

"The high number of women who are victims of human trafficking are not achieving access to judicial resources and because of this, the large majority of these incidents remain in impunity. ... Their rights remain unprotected," it said.