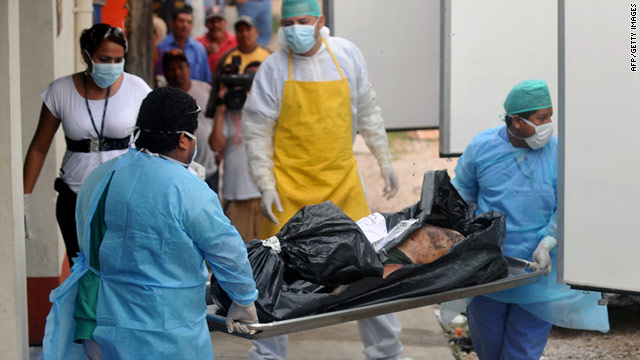 Forensic workers move one of the bodies found in a northern border province of Guatemala on May 15.
STORY HIGHLIGHTS
RELATED TOPICS

Guatemala City (CNN) -- Guatemala's President Alvaro Colom has declared a "state of siege" in a northern border province, ordering in the military after police found 29 migrant workers brutally killed on a farm over the weekend.

Colom, in a televised address late Monday, promised to challenge the drug dealers authorities believe are responsible for the killings, which have been described as a "massacre" by the state-run Guatemalan News Agency.

"Despite the few resources we have, even with the lack of military personnel, we will still come face to face with organized crime," he said.

One man was captured and two were killed during a shoot-out between suspected drug-runners and police, Colom said.

The killing spree, which officials said took place late Saturday into early Sunday, is one of the nation's worst since the end of the civil war in 1996.

The killers -- believed to be members of Mexico's Zeta drug cartel -- decapitated several victims and left their body parts strewn across the terrain, police said.

Survivors who detailed the killing spree included a pregnant woman who covered her daughters and begged for mercy, Guatemala's Prensa Libre reported. The woman said the group that attacked the farm consisted of more than 50 armed men in fatigues, who had Mexican accents.

At least three teenagers were among the victims, according to the state-run Guatemalan News Agency.

A man who said he survived the attack told Noti7 he played dead after he was stabbed in the stomach.

The state news agency said investigators were also weighing whether the attack could be connected to the Saturday slaying in Peten of Haroldo Waldemar Leon, the brother of alleged drug trafficker Juancho Leon, who was killed in 2008.

In February, Alvarez said federal authorities should declare a state of siege in Peten, which borders Mexico.

President Alvaro Colom took that approach in the neighboring province of Alta Verapaz in December, implementing an emergency rule that allowed the military to order anyone suspected of conspiring against the government to be arrested and imprisoned without a warrant.

That has made the area fertile ground for the Zetas and other drug gangs, he said.

In an interview with CNN en Español last year, Guatemalan Interior Minister Carlos Menocal said his country needed more help from the United States to combat cartels that are increasingly carving out new drug transport paths. He noted that clashes between authorities and the Zetas had significantly increased.

The U.S. Drug Enforcement Administration describes the Zetas as "a group of Mexican military deserters ... who have kidnapped, tortured and murdered -- including beheadings -- of law enforcement officials, innocent citizens, informants and rival drug gangs."

Corruption and violence are high in Guatemala, according to the United Nations, which created a committee in 2006 to investigate those issues there.

More than 200,000 people have been killed in the nation since 1970, mostly as a result of organized crime, drug-trade violence and a 36-year civil war that ended in 1996.

That, in addition to its strategic location on the drug transit corridor between Mexico and South America, makes Guatemala the perfect place for cartels to operate, Logan said.

"You have the window dressings of a democracy, yet it's a hollow state where basically anything goes," he said.